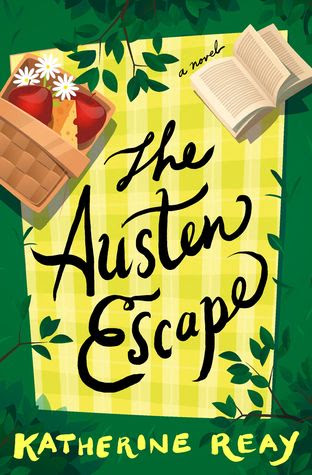 I have been so busy lately. Mea Culpa.  I was in Cape Breton for work,  have been writing a ton on my current WIP ( cannot wait for you all to meet Hamish and Reggie), have been seeing a lot of theatre!!!!!! ( including my first Shaw show of the Season at Niagara on the Lake), have been socializing and adventuring in Toronto.  So my apologies that the blog has fallen behind).


"When there are serious matters to discuss, Austen women walk. And it has the side benefit of keeping our figures so light and pleasing."


I have to admit I have been getting a little tired of Austen everything.  So many updates. So many re-imaginings---  But, if anyone can do Austen, Reay can.  Especially because she doesn't just transpose a story into a new setting, she interweaves a new story with new characters, nuances and worlds with the timeless sensibility and humour of Jane Austen.  Even while you are not reading ye olde "Austen Update" that merely parallels Austen heroes and heroines in a modern setting, you are being confronted by an invigorated re-visitation of Austen's wisdom.  When this strikes you, midway through the book, you recognize that Reay is far smarter than you initially could have thought.  This is not just a nod to Austen, this is a thesis ABOUT Austen (specifically her relationship with Bath and her inter-textual connections about love, wisdom and modern relationships) told in prosaic form.

It's not often that fiction is supplanted with such an academic tenet; but that is what makes Reay  one of my favourite writers.  With all of her Austen and Bronte and Weber infused prose, she makes a statement about the books she pays homage to.    It is this added layer that asserts her as one of the finest contemporary voices.

But while I get all stodgily English major-y on you, what makes Reay a must-read is her natural accessibility.  While this  certainly offers a grand wink and nudge to fans of Austen's work on a deeper level, so it is a keen and sparkly colourful carousel of characters transplanted into a Regency-modern hybrid in present-day Bath.


Mary Davies is a quiet engineer who works for WATT, a startup in Austin, Texas.   Constulant Nathan is one of the brightest parts of her day.  While she works to gauge disappointment that her latest optical project Golightly ( yes, THAT is Holly Golightly) didn't take off, she assembles wire animals at her desk and works to  decipher the extra attentions Nate gives to her.  Work complications and a new manager, however, inspire her to accept her life-long friend Isabel's invitation for a vacation at an Austen-themed estate near Bath.   Deciding to escape the everyday and clear her head, she follows Isabel into a world of costumes and balls, of traditional manners and eccentric participants who acquire a personage from the books for their stay.

But Isabel is not as balanced as she seems and her domineering friend soon begins to show a remarkable mental instability, actually thinking she is Emma Woodhouse and speaking in the sequences and memories of Austen's canon.  While  Mary struggles to reach her friend, she discovers Isabel's connection to Nathan, who has sparked her life for so long it has flickered into a kind of unending flame.  Hurt and confused---mostly by Nathan's own arrival at the estate--- Mary navigates the map of herself while amidst a fresh and inviting, humorous and whimsical world patronized by " clever, well-informed people who have a great deal of conversation."
Human relations and fallacy, the map of the human mind, the friction between literature and art chafing against science and logic and math: all in a carefully constructed waltz.

I have spent some time in Bath and was happy when the resplendently unique city was drawn to colourful life by Reay's consistent canvas.  As Seattle, Chicago, Italy and Ha'worth before, Bath becomes a pulsing throbbing city-- the antidote to the surging Austin heat.

While this book may remind readers of Austenland  by Shannon Hale, it takes a step further in immersing the reader not just in a surfacely Austen world of Regency mannerisms and dialect; rather a deeper look at the wisdom of Austen and her prodding and poking into the deepest tenets of human nature.  There is a particularly profound moment that finds Mary understanding more about Austen's relationship to Bath beyond the lens of Persuasion and Northanger Abbey that made me shoot up and think.


What makes The Austen Escape different than all other Austen updates and adaptations is that rather than just making a contemporary parallel of an Austen story and Austen characters, she works a profound and meaningful thesis about Austen into prosaic form. And that is why the Austen Escape is an integral companion to the study of Austen in the 21st Century.

[with thanks to Thomas Nelson for the review copy]

"As the morning rolled up its sleeves and got ready to welcome its friend afternoon, the sunshine held fast in the clear sky."


"And Nathan fished. The silence was light and lovely until I realized it wasn't silence at all.  The stream gurgled, birds chirped, something called in the distance."


"Something had been missing and its absence only felt with its return. Nature abhors a vacuum and will fill it but you must create an opening. Music was that opening. It felt as if the universe was expanding right before me, in a ballroom in Bath,"


"And I was diminishing--as one should before the size and unending grandeur of the universe. It wasn't that I was smaller or less significant; it simply felt like I didn't need to fight for a place within it or for my own protection. "


"I waited too and watched the stars.  A few flickered and the sky felt like music. Music required honesty."
Posted by Rachel at Thursday, June 08, 2017

I am undone.
Sigh.
How many days until November?