“The work boyfriend. A curious relationship somewhere between pal and crush.” 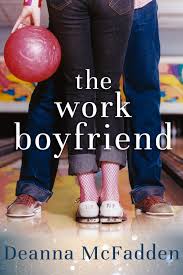 Imagine a chicklit novel where you legitimately cannot predict what will happen at the end.    Even the most intelligent and edgy ones, at core, follow a pretty concrete pattern.

What set The Work Boyfriend by Deanna McFadden apart for me was having absolutely no clue what the ultimate relationship end for our narrator Kelly was going to be.

A love letter to Toronto, the midpoint in the previous decade and to the crazy over-thinking lengths we go to to evaluate our love lives, McFadden paints a vulnerable and at times bleak portrait of a young woman, good at heart, who would rather crumble her world of her own volition than let anyone else take control.

Kelly and Rob have been together for years. Rob is pretty much the perfect solid boyfriend, if somewhat boring.  The sex is boring, his parents’ rich holiday soirees are boring and their relationship is like a comfy pair of sweatpants: you super want to crawl into them at the end of the day but sometimes you just want to pull on that new pair of skinny jeans, no matter how restrictive.

At work, Kelly is drawn to Garrett: earbuds draped around his neck, a rainbow of eclectic t-shirts, a smile and floppy hair that cause her stomach to flip each time he passes her cubicle.  Garrett and Kelly are good friends—within the sphere of work--- and both have a sizzling chemistry that the reader knows should probably stay bottled at the office or the neighbourhood pub when surrounded by other coworkers.

The timespan of the novel is tight: two weeks give or take around the Christmas Holidays.  But, Kelly’s mental span is quite realistically elastic: a trampoline that bounces back and forth from College and the Bad Boy Christian to the present where she thinks.about.Garrett.all.the.time.

I wanted to not relate to Kelly as much as I did.  She screws up. She throws in the towel in moments she could fight and she seems to think that there is some virtue in making poor decisions or not letting good things happen to her.  Her decisions have consequences and not once is she clutzy in the typical chicklit fashion. She’s messed up while navigating a realm of romantic possibility.  This is what separates McFadden from the pastel-coloured fun of Sophie Kinsella, her narrative voice and warmth what keep her from falling into the trying-too-hard-to-be-edgy work of Catherine McKenzie.   A bit Nick Hornby, a bit Rainbow Rowell,  McFadden has an inimitable voice that is rambly and believable, full of stream of consciousness backstory that remarkably doesn’t make you want to throw things.   The thinking person’s chicklit. And you will relate.  You will relate to Kelly expressing, frustrated: “ I want to want to marry him. I want to want to have kids. I want to want all of it, deep down, there’s a quagmire of doubt about everything. I can’t put my finger on it.”

It’s like Kelly is inviting you to move in her brain for a stint in a sort of Pixar Inside Out  way.

There are some truly beautiful moments in the book.  This lyrical and brave book that is deceptively readable but really super thought-provoking.

“A stillness descended upon the table, like how a snowfall quiets a forest.”

And, one of my favourite sequences from any book of the past year. Because this *gets* me

That feeling you get when you’re in the airport limo driving back down into  the city and you see the skyline—the CN Tower, the condos that litter the lakeshore, the familiar bumps of the Gardiner Expressway—and then, no matter how much fun you had while you were away[ …] that warmth spreads through in the back of the car ---that was what I imagined being married, living with someone for eternity, felt like.

“Winter allowed the city a moment to hold still for the holidays and let people tuck in nice and warm. The streets were quiet, dampened by the snow. Before the snowplows, before anyone shoveled, before pets had to be walked, the sidewalks were crisp, crunchy even.”

“The air might stop at nothing to freeze your lungs mid-breath, but I’d never wanted to live anywhere else.”

“The CN Tower refused to blink. The stars paused. The air dropped even lower in temperature.”

“Love is tricky. But now that I know I can stand on my own two feet….”

Well, now I have to read this book too. My list is getting way too long.