Author Interview: The Heiress of Winterwood by Sarah Ladd 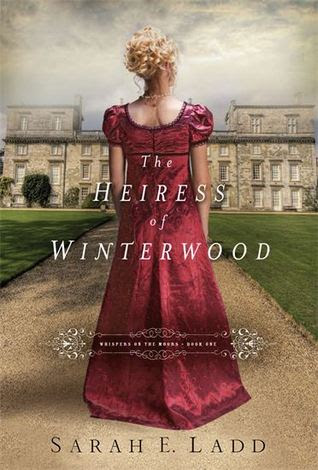 1.)   The Regency voice in The Heiress of Winterwood is so impressive and consistent---not only in the dialogue---but the narrative voice as well. Was this something that came easily to you (you cite a love of classics such as Austen and Wordsworth on your website) or were you conscious of this and was it difficult to iron out any modern day manners of speech?  I have read literature from the Romantic and Victorian periods my entire life (both poetry and prose), and so the rhythm of the voice came pretty naturally. In fact, I had to go back and tone it down a bit!  I tend to lean toward “purple prose” and go over the top, and so I would write the scene as it came to me, and then I would go back and rein it in. That is not to say that I did not have to go back through it when I was done and look specifically for modern words, because of course, they did slip in!  There were also several times I had to stop and check the dates of when certain words were first used. For example, do you know that they did not say “hello” during the Regency?

2.) Winterwood—like Pemberley or Thornfield Hall—is so well-drawn I felt ensconced in its grand halls and ramblings its extensive grounds with Amelia and Graham. Is Winterwood inspired by a specific estate? What tactics did you use to “get” there mentally so that, in turn, your readers could explore? As far as the exterior of Winterwood, I modeled it loosely after Wilton House in Salisbury, England. To get the feel of the location, I pinned pictures to my inspiration board. Pictures of the buildings, the moors, the countryside, the gowns, the ships … anything that I thought would visually help me recreate the ideas in my mind. I also listened to a lot of music from the Regency Era while I was writing.
3.) As a nautical history buff (I re-read Patrick O’Brian all the time), I was enamoured by Graham’s reminiscences of the sea and the calling and pull he had to his ship –even while on land. What sorts of nautical research went into the tale?  I did a lot of reading. One book I found particularly interesting was Jane Austen and the Navy. I also researched the types of ships, nautical information, and battle information about the War of 1812. I spread this research out over the entire span of time I was writing the book, so as I learned new tidbits of information I went back through the book and peppered them in where appropriate. If you are interested in learning more about the Navy during the Regency, one fun place to go is The Jane Austen’s Center’s page on military historyor their page on Officer’s Uniforms in the British Navy.

4. ) Many readers, like myself, idealize historical periods such as the Regency. What’s one fact about the Regency period that might prove living then is best kept to daydreams? I touched on one of these facts in The Heiress of Winterwood, and that was the mortality rate of mothers in childbirth. One article I read on the Jane Austen Centre’s website said the following: “To be sure pregnancy during the Regency was a risky business with a nearly 20% mortality rate for the mother”, and I have seen this percentage much higher in other sources. The infant mortality rate was also shockingly high. The same article says “Two-thirds of the children born in the Metropolitan Area of London in the eighteenth century died before they were five years old and three out of four of these poor little victims failed to reach even their second birthdays.”  These are sad, sobering numbers. Very tragic.

5. Heiress of Winterwood is, fortunately, the first of a series. Were you cognizant of the fact that there would be more to tell while you were plotting the first book? I’m a little embarrassed to say this, but … no!  Not when I started the book, at least! But as I got further along into the writing process, I did start to think of what would be the next step in the series. My idea for The Heiress of Winterwood started with a single question:  What was the one thing that a well-bred lady in the Regency period would NOT do? The first answer that popped into my head was “propose to a man”… and the idea for The Heiress of Winterwood was born! The ideas for the other two books in the series came shortly thereafter.

6.) Jane Orcutt, Julie Klassen, Ruth Axtell and Jane Austen are the delight of several women of faith. Why do you think that the mannerisms and traditions of the Regency period find such a home with Christian women?  The church was central to Regency life, and so much of the mannerisms characteristic to the Regency period are about restraint. Self-control. The idea of good overcoming evil. I find it very interesting that a woman’s reputation was her prized possession during the Regency, and a reputation could be soiled over the slightest mishap, so a woman during the Regency was always aware of what was “right,” but that does not mean she did not encounter temptation. This goes away from your question a bit, but many people did not know that Jane Austen also wrote a few prayers. I think these prayers give a really interesting insight to a Regency woman’s views on God and religion. If you are interested, you can read these prayers here. They are as beautiful as they are thought-provoking and stirring.

Enjoyed the interview. Loved Heiress of Winterwood and thanks for posting the link to Jane Austen's prayer. Beautiful!

The Heiress of Winterwood was a great read. Thank you for the interview. I must add my thanks for adding the link to the prayer as well. And, I am anticipating a sequel as well!