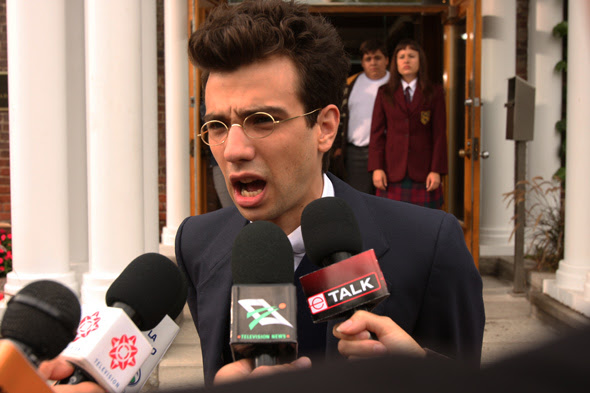 The Trotsky (a T.I.F.F. favourite)is set in contemporary Montreal. It features Jay Baruchel --- who will have my heart forevermore after voicing Hiccup in How to Train Your Dragon and Colm Feore --- who has always had my heart but has it even moreso since his turn as Cyrano in the Stratford Production of Cyrano de Bergerac last summer.

17 year old Leon Bronstein believes he is the reincarnation of the infamous Russian Revolutionary and once taken from his carefully-cloistered private school and placed in a run-of-the-mill public system he takes the term student “union” literally and plans to overthrow the Government. Here, the government is the tyrannical Mr. Berkhoff, played villainously by Feore.

I thought this film was fabulous. It was funny and clever and featured Baruchel in another empowering teenage role. Leon is not your average young man and his scheme border on manic. But, as his enemy, the head of the schoolboard attests, he is a brilliant young man. Baruchel is endearing as a vulnerable and confused teenager who experiences finding himself and his purpose by reimagining an intense part of liberal history.

As much as the coincidental circumstances in Leon’s life align with Trotsky’s (including an impassioned affair with an older law student named Alexandra), much of Leon’s experiences are created and crafted by an ingenious teenager who sees himself as having a greater part than his world allots.

The climactic scene in the film, where Leon stages a voluntary coup ( led by students dressed as the eponymous creatures from Orwell’s “Animal Farm” ) is surprisingly thrilling and tense. Leon’s a bit of a nutbar, but you want him to succeed. Sort of like the hero in a Gordon Korman novel… which leads me to surmise:

All-in-all, this film was cleverly written, utterly Canadian and immediately called to mind a plot from a Gordon Korman novel.

Now we just need to cast Jay Baruchel as the reincarnation of Boots in the MacDonald Hall series.

(also, Canadians, there is an amazingly giggly scene in which Baruchel's character is featured on E!Talk Daily with that annoyingly side-burned Ben Mulroney!....nice little inside Canadian joke)

Okay, you sold me. I'm going to try to find some way to watch this movie.