To Dance at the Palais Royale by Janet McNaughton 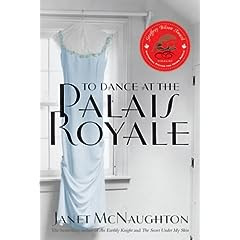 This book has been sitting on my shelf for years and I never picked it up. So, preparing for a bus ride to London for a long weekend, I tossed it in my bag and read it while waiting for the bus then finished it on the bus. It is a quick, lovely, languid read.

Aggie leaves her large family and domestic role as a housekeeper in Scotland to move to Canada in the late 1920s. Toronto's elite hanker after the idea of British and Scottish domestic workers and Aggie has no trouble securing a position in the Deer Park area of Toronto ( near St. Clair West and Yonge).

I live in Forest Hill ( very near where the Stockwood`s mansion would be fictionally set )and felt that I was transported back to a city I love in Aggie`s time. The streetcars rumbled, yes, but over tracks still primitive and new; Royal York on Front Street had not finished completion; Union Station ( which McNaughton describes as a hallowed, hollow cathedral ) stood loftily as the biggest building Aggie had ever seen and the mythical Sunnyside park near the harbour was filled with stands selling redhots; dance pavilions; mirth and merriment.

McNaughton spins us into a world of colour and prosperity in a booming post-war Canada. Aggie meets Rose, an indelible flapper; Rodney a posh Queens undergrad who shirks his father`s stock business to pursue history and Rachel, a domestic servant like herself sponsored by an upstanding man named Moshe: who saves her from the travesty of liquidation and hardship in pre-Nazi Poland.

This world: the markets and kiosks of Spadina when clashed with the ferries to Center Island; the upscale Rosedale mansions; luncheons at the King Edward and traipses around Eatons and Simpsons is a finely rendered friction.

McNaughton does well at painting the often invisible line between classes ( and the internal skepticism of jewish residents and other immigrants like Rachel) as Aggie weaves in and out with little more than a fancy dress and a few well-thought lies.

Having experienced all corners of bustling Toronto: prejudice, social injustice, women`s burgeoning roles, sexual awakening and a strengthening independence, she is able to carve her own world and leave her own stamp on the booming city: this includes meeting a wonderfully painted Newfoundlander named Will with a sing-song dialect and a lackadaisical way about him.

Each dialect from each of the worlds Aggie visits ( including her own Scotch dialect ) are perfect.

The story is brilliantly told and unfolds so subtly you are swept up in its simple beauty.

I heartily hope that McNaughton abandons the more stark and futuristic novels of her recent distopian fiction and returns to more yarns like this one.

Beautiful, historical, full of promise. Ending on a shrill, high note that even the lingering Stock Crash ( waiting around the corner like a tiger with teeth pried open ) can sever and mute.

Oh, I want to read this just for the historical Toronto setting. Sounds lovely!!

I think I want to read this now. I will have to add it to my TBR pile!

Did you not know that this is one of my all-time favourite books? I used to sell it like crazy when I worked in the bookstore. LOVE IT!