Guys! did you see the season finale of White Collar. First off, it had a plot-twist.  I have always been able to figure out a White Collar plot-twist; but for the first time they threw me off. I feel so cheated.

Thirdly, my friend Gina and I were sure that Sam/James was going to get killed off. Maybe accidentally shot by Peter ( after we saw last week's preview of the episode )

but I didn't think at all that Sam/James would turn out to be AWFUL and FRAME PETER FOR MURDER!!!!

Instead, it flipped the tables. We all kinda wanted James/ Sam to redeem himself, to prove to the Neal who always wondered who he was, that he was decent at core, inherited from his wronged father.

Instead...well... his father kinda isn't decent at all and truly believes that there always needs to be someone to take the fall.

And now... the coolest part.

Last week, Treat Williams followed me on twitter ( i know!!!)  and obviously I took to twitter with my heartbreak and rage and this happened 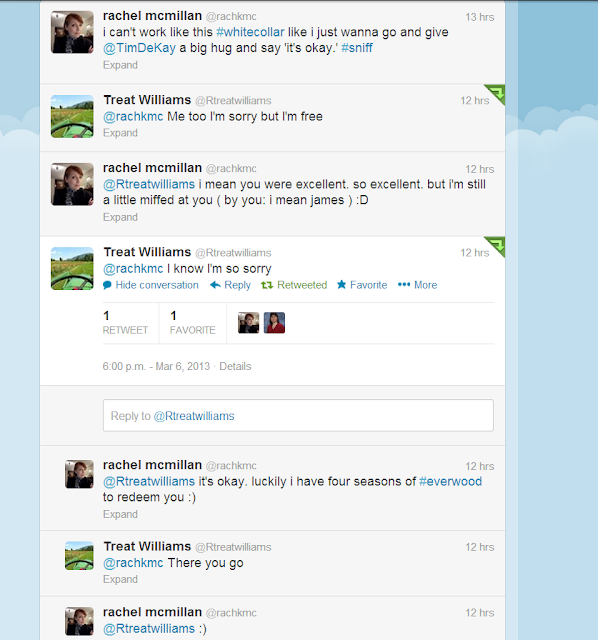 Treat feels badly. I know he does!


And this little twitter conversation helped numb the pain of PETER ASDFHJASDFJASDKFJASDFKJASDF A!!! being arrested and in handcuffs and Neal watching helplessly and PRISON BREAK! we need a White Collar PRISON BREAK

CANNOT wait for this series on DVD come May/June. It will be EPIC. ;)