In Which Rachel watches some old Catherine Cookson Miniseries Vol I


Guys. Sheesh.  Once, there was a famous and prolific recipient of the OBE who wrote, like, a gazillion melodramatic books that you are likely to find at your grandmother's or stuffed in the bookshelf at that cottage your family rents.

Here, being British, they brought these tales to televised incarnation as reverently close to the melodramatic source as possible.  What we get? Catherine Cookson miniseries. … which are just… I mean…..

(note: I know a lot of people are fond of Cookson, I am too! She wrote some gripping tales of love and struggle, of prostitutes and hunchbacks, of poverty and class-divide; but you gotta admit, there is more than a little soap opera in her milieu ---so please, just enjoy the ridiculousness that is a Catherine Cookson miniseries when you take a step back and look at it logically).

Once upon a time there was a prostitute’s daughter who was cute and had impeccable manners. Her mother would entertain her “uncles” at night (you know as well as I where THAT euphemism is going)and this was against the law. So, one day, her mother was arrested. A kindly-brash old lady, a “rag” lady, who sold weird used wares in, like, a 19th Century Goodwill kiosk takes the little girl in and raises her (kinda) alongside her (Mill on the Floss, holla!) hunchbacked companion Ben.

The little girl is pursued by the pimp that once “loved” ( okay, love is a strong word; I’m not sure what this is ) her mother who feasts his eyes upon her nubile eight year old form (eww) and promises that she will be his when the girl grows older (eww again). To keep her from being molested or kidnapped by the bad pimp, the hunchback and the rag lady send the little girl to a convent where she meets a rich family and gets stricken with a ruler and is basically kinda Jane Eyre at Lowood; but with more spirit.

Then the little girl grows up into Samantha Stewart.  The hunchback Ben now loves her and the men of the street are, like, “tasty” and Sam Stewart is all “umm… guys, c’mon!”  and she is eventually invited to a party where she wears a blue silk gown while everyone else wears black. Which is, of course, a bad thing. So, the matron of the house, is all “ boys, you should molest her” ( because someone always needs to be threatened by sexual assault in a Cookson novel ) and they try to but Bingley from Pride and Prejudice shows up and saves her.

Then Sam Stewart’s long-thought-dead father shows up for no reason.

Sam Stewart courts Bingley while Ben the hunchback watches all jealous and stuff because, guys, he totes loves her.  But, turns out Bingley just wants Sam as his mistress because she is of a different social class ( okay, the real Bingley? Yah, he never would’ve done that. Ever! He’s Bingley, for god’s sake). So Sam decides “heck no! my self worth!” and turns him down.   Then, the pimp who followed her when she was, like, 8 kidnaps her and takes her to a brothel and sets someone on her. But, not before Ben the hunchback can save her and murder the assailant (well, murder is a strong word, kinda self-defense ) who was planning on preying on her innocent Sam Stewart flesh).   The police don’t really miss the loser who owned the brothel so Hunchback Ben is off the hook and he marries Sam ( sorry, Andrew Foyle ) and they live happily ever after and open a bakery and eat custard tarts.

Now, those of you who are aware of Cookson know that Tilly Trotter is kinda legendary. It is so epic it is a trilogy where the names of the books give away everything in the plot (Tilly Trotter Widowed, Tilly Trotter Wed ) and it was turned into a magnum opus of a miniseries (though it cut out the Wed and Widowed part ).

Tilly Trotter lives with her grandpa and grandma and chops wood and is beautiful with russet curls and a lovely complexion. Her friend Simon, the farmer, is the true love of her life: what with his broad shoulders and dimples and annoying Yorkshire accent.   Tilly is pursued by a jerk from the local village who wants to claim her. Tilly is, like, heck no!  Jerk from Local Village gets mad. Farmer Simon gets married ( who knows why! He doesn’t like his wife, he likes Tilly, they dance at his wedding. It’s all very odd).  On the way home from Simon’s wedding, Tilly is CAUGHT IN A NET by Jerk from Local Village and his Douchey Friends (a literal net, like a fish! ) and they attempt to rape her. But, don’t worry, the master of a local estate is nearby having an affair with his mistress because his wife has turned into a cold fish and they are there to rescue Tilly.
Tilly goes home and learns that they have all been living off of stolen money ( think this plot point is important? Think again. It matters not, you will never hear of it again. In four hours of this lovely tripe, you never hear of that again) and that jerk from the local village is still after her. Also, when she was practicing reels in the church basement one night with the minister’s wife, it got her branded as a witch (????!!!??? ) So, not only is Tilly pursued by lustful jerks from the pub, she is branded a witch.

Thinking her to be all witchy-like, some guys put her in the old town stocks and throw tomatoes at her; but not before a bunch of people can save her and the minister’s wife can accidentally kill one of the assailants (in another plot point that will never be mentioned again).  Tilly is all Hester Prynned in town and Farmer Simon (who hates his wife, still ) and her grandparents are her only friends.   That is, until granddad dies and the mean guys from the pub burn down her house and kill her grandma while Tilly is running errands.

Not knowing what to do, and convulsing with fake, dry tears, Tilly is spirited off to the grand Sopwith estate to look after  the children.  There’s a couple Maria Von Trapp moments with frogs and stuff; but it all works out and everything is fine until their daft mother, is, all “dude! You’re having an affair!" and takes the children away. Not knowing where to go and still branded a witch (!!!????!)  Tilly sets to working in the mines. 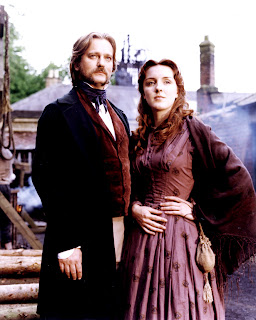 And this is where it turns into…like…the cinematic masterpiece it is. The owner of the mine is Mark Sopwith ( the same guy who is the lord of the manor whose kids Tilly looked after) and one day there is a mine accident and Tilly and Mark are trapped beneath rubble.  As fast as you can say “ROCHESTER THIS! DARNIT!” Mark is injured and loses his leg and makes Tilly his housekeeper.  They grow in friendship and he obviously loves her with every uneven whisker on his awkwardly side-burned face; but Tilly is still pining for Farmer Simon who—it would seem--- kinda loves her, too?  I mean, sure? I mean….

Turns out jerk from the village is still after her for some unknown reason ---SHE MUST BE MINE!---and so he intercepts her path home and tries to rape her ; but she throws him down a cliff and he breaks his back….

Back at home, the Master, Mark Sopwith, is all “ Tilly. Be my mistress. I love you; but I cannot divorce my wife; because this is 19th Century England even though I know she has a lover and has taken my kids”

And Master Sopwith is all “You still love Farmer Simon. Turns out his wife died 6 weeks ago.”
And Tilly is  “WHAT?! He is freee!  Love of my life” and she runs to find her Farmer love who is actually shacking up with a woman in the barn and Tilly sees and her heart is broken.

She goes BACK to the manor and Mark Sopwith is, all “ I love you.”

And Tilly is all “MY --*gulp* *sob* ---my heart! My faith in humanity….” And then Tilly goes to her room and while she is there she realizes that it IS Mark that she loves and that she HAS no self-respect so she GOES back to his room in her nightshirt and climbs into bed with him and lives happily ever after as his mistress having happily tossed her morals and resolve out into the dark moors.

In short, masterpieces, both of them.
Posted by Rachel at Tuesday, March 26, 2013

I need to watch these series more often...they are like crack cocaine...so bad but yet addictively delicious!

this is brilliant is what this is :)

No, YOUR RECAP is what's brilliant. "He obviously loves her with every uneven whisker on his awkwardly-sideburned face." Bwahahaha!

Such a fun post! It reminds me of Genevieve Valentine's 'reviews' of CC adaptations, have you ever read them? (http://www.genevievevalentine.com/category/the-catherine-cookson-experience/)

I do love me a CC adaptation now and then, it's enjoyable to see now famous British actors and actresses in their earlier roles and the stories are generally gripping. I also think there are a few CC stories/adaptations, which are less melodramatic and might come close to 'good period drama', such as The Moth or The Wingless Bird.