Married to A Perfect Stranger by Jane Ashford 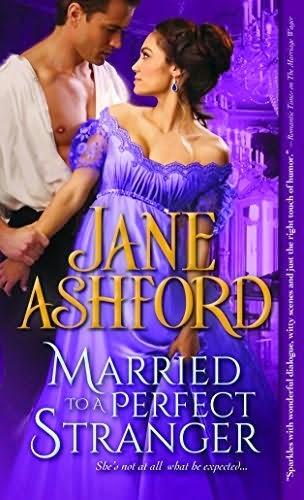 I was so excited when Sourcebooks sent me the link for this on Netgalley as I love a good Regency romance! I also love the trope of two married people finding love --and getting to know each other---well after the fact.

Showing great research and snappy dialogue,  John and Mary's world takes us from the domestic sphere to the Foreign Office and beyond.  John's work is such that Mary will always be half-hidden from a part of his life. The ensuing danger and mystique really helped shadow a perfectly-painted tale of 18th Century England.

On her webpage, Ashford credits Georgette Heyer and I can see traces of Heyer in her prose---- (though, reader, we do get a few *ahem* scenes that Heyer never explored ;) ) and the great narrative consciousness weaves seamlessly between John and Mary's perspectives.

Returned from sea, John expects the docile mouse that he married before his departure; whereas Mary, now skilled in being the head of a household, has a mind of her own.

Of course they are attracted to each other and of course they grow closer together--- but there are just the right amount of those misunderstandings---those bread-crumb trails that leave the reader gloriously indignant and yearning to shake the characters to attention.

I  was also quite taken with the idea of a makeshift family immediately forged when John encounters Arthur and a stray mutt, as addition to his household.

The exploration of expectations vs. reality is wonderful and rests easily at the edge of Ashford's talented pen. At one point, the narrator refers to the embroidery of tales as "Words like a patchwork quilt" and the seedy scenes taking John far from the societal hubs of the ton and relying on his penchant for eastern languages are well-developed.

Try tasting THAT on your tongue! You can never say Romance is bereft of poetical sensibility....


"Nobody likes an encroaching, managing female", he said. "Actually, quite a few people seem to!"

I loved Mary and her resolution.  SHE WILL NOT BEND!