I never write people I know into books.... except for that one time that I did

There's a line ( which I am paraphrasing ) from the Sullivan Anne of Green Gables series where someone (am blanking ) tells Anne that when she is published, Rachel Lynde will think the book is about her.

I don't consciously write people I know into stories.  There are traits and facets, most likely subconscious, borne of the fact that I think writers are like velcro and they pick up things from life along the way.....

But I wanted to somehow work the Holmesian trope of the Baker Street Irregulars  into the Herringford and Watts series.

Holmes has the trusty Irregulars led by Wiggins who run about and collect intel for a shilling and Sherlock, in the BBC, has his homeless street network. I wanted Merinda, my Sherlockian counterpart) to be able to call on a few people.  She often uses their friend Ray DeLuca, journalist and Jem's love interest, but I wanted people who could go a little deeper.

I then immediately thought of two things:  a.) how great the addition of a few riff-raffed teenagers would be b.) how two of my best ( and smartest ) friends Kat and Karin could basically run their own undercover network.

So, for the first time ever I wrote two of my friends ( de-aging them by a decade and a little bit ) into a story.    Kat being, well, my Kat--- a highly intelligent and incorrigible brand of dangerous street kid who won't let anyone get away with anything ( she has a temper) and Karin, known as Mouse,  who wears her second-or-third-hand bowler tipped strangely on her short head and bounds about where she shouldn't bound about.

Once I wrote them into the plot for A Singularly Whimsical Problem, I knew that I wanted to bring them back.... so the Herringford and Watts series has a few new recurring members: Kat and Mouse completely stolen from my friends

interesting tidbit: though they had known each other for years and years  Kat and Karin actually discovered that they were related a few years back! here they are at a favourite breakfast spot, Fran's,  looking at a family tree book and mapping out their cousin-hood. 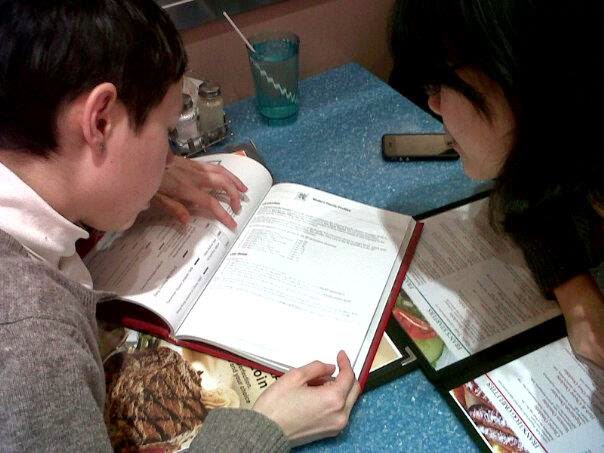 Chip and Chap, united at last in fictionhood! (Although the matter of the 6th generation pickle remains to be settled...)

I'm sure Mike will figure it out at some point! He likes deducing the how-many-times-removed and number cousin thing!