The Peter Weir film (a.k.a. Rachel's favourite literary adaptation of all time ), does not just draw (as presumed) on the first book in the Patrick O'Brian canon (Master and Commander) and the tenth book (The Far Side of the World); but also on the third book, H.M.S. Surprise.

Remember when Stephen operates on himself on the Galapagos islands after Jack has turned from his pursuit of the Acheron to save his friend?  In H.M.S. Surprise (one of my favourites in the 20+ volume series), Stephen operates on himself after fighting a duel with his true love, Diana Villiers' (bitch. she is such a bitch, she treats Stephen mercilessly. For 20 books. bah) lover. Remember when Stephen and Jack are walking on the Galapagos near the harboured Surprise and Stephen mentions he will name a great tortoise after Jack? Testudo Aubreii?

Don't worry. This is fun and we can talk more about what Aubrey/Maturin moments are inspired and from where later on.... 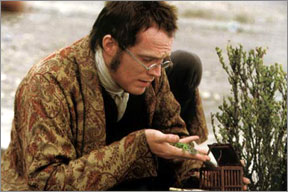 I am visiting my parents for the long weekend and at some point they bought me two beautiful hardcover Patrick O'Brian books to add to all the doubles (nay, triples) I have in my extensive collection. One was Surprise, so I was flipping through it last night.
Posted by Rachel at Monday, September 05, 2011

Email ThisBlogThis!Share to TwitterShare to FacebookShare to Pinterest
Labels: aubrey-maturin

Sadly I have never read these books - if I took up a 20+ book series I wouldn't have any time for sewing - but I loved the movie passionately. I loved the score (shipboard string duets FTW!) and the Aubrey/Maturin relationship was the nicest bromance I've seen this side of 'Band of Brothers.' But I am not sure how you can write a M&C post without sharing James D'Arcy and the SEXY SCAR OF SEXINESS.

these books are on audible, as audio books, you can simply listen to them