The Foundling by Georgette Heyer 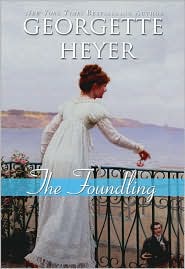 I give you, The Foundling: a Regency Romance with kidnapping, illicit letters, coddling of sickly dukes and fantastic names ---like Liversedge and Adolphus Gillespie Vernon Ware, the Duke of Sale.
Adolphus Gillespie Vernon Ware (Gilly to us) and his elder cousin Gideon are at the center of this adventurous drama which features a foundling named Belinda, mistaken identities, arranged marriages and a bromance to write home about.Gilly has been coddled since sickly birth by his adoring, if overbearing, uncle who believes that his sickly disposition will be the death of his favourite pet. Raised alongside his much stronger, sterner and stalwart cousin, Gideon ( the prototype of the usual Heyer hero), Gilly reaches his 25th birthday before ever really stepping into his own.
Standing to inherit a large fortune  and primed to an arranged marriage to a beautiful and respectable longtime friend, Gilly decides to go in for one bout of adventure helping his blackmailed cousin Matthew along the way.
Here, he becomes entangled in an affair of the heart that has little to do with him and, alongside two unlikely companions, becomes mixed up in villainous devices.
Oh this is just.so.wonderful. Gilly has such a big heart and his intentions are always wonderful and his disposition is so accepting!  You will LOVE HIM! ( you will love him more when you imagine him as played by Billy Boyd)
Gilly’s uncle protects him mercilessly; but refuses any other to speak against his beloved nephew; Gideon would take a bullet for Gilly but applauds Gilly’s resolution to set out on his own and the female companions that off-set the major masculine center of the tale are just as spirited and beguiling as expected.
And Gideon--- oh my god.  You guys--- Gideon!  He is okay at taking a second standing to his more diminutive cousin. He knows that Gilly is a favourite of his father’s ---but cares not; he knows that Gilly stands to inherit a more prestigious position; but happily relinquishes responsibility to the cousin who was raised alongside him as a brother.  And if you get in Gilly’s way---beyond the measures he hopes his cousin will strive in the guise of suited independence, Gideon will lose all control.
When a villain threatens his cousin, Gideon strides in full force.  His reaction to seeing proof of life when Gilly is kidnapped will stop your heart (much as it seemingly has stopped  Gideon’s).
It’s just all so cozily and sparkly and delightful. Seriously, go read this now, please.
It’s licking cake batter from a spoon. I don’t want to deprive you of this --- I can’t --- it would be inhumane. You deserve this happiness, reader, so here is where you can fit yourself with this material tout de suite!:
@SourceBooks
@amazon.com
Posted by Rachel at Friday, September 09, 2011

I really must read Heyer...

sooooo good! in ways i prefer her to jane austen (can't believe i just said that; but true...)

This is one of my favorite Heyers! Just so sweet and kind and wonderful. I actually have it here at school in hopes of a re-read soon...

if i could recommend this to everyone in the world, i would. it's just wonderful! I am glad you keep it close, aarti!!!

This is the perfect time to curl up on the couch with your favorite blanket and a nice hot mug of tea and good ole Georgette.

5.0 out of 5 stars The Foundling by Georgette Heyer, August 10, 2013
By Merlene (Custer, SD United States) - See all my reviews
Amazon Verified Purchase(What's this?)
This review is from: Foundling (Kindle Edition)
Another one of my favorite books by Georgette Heyer - and the plot of this story is not at all what you'd expect. It's a very witty and often amusing tale of a young man's gradual acquisition of self confidence, and it's quite a joy to read!