For the next instalment of Great Adaptations, I am happy to present the most recent BBC adaptation, starring Ioan Gruffudd, Charlotte Rampling and Justine Waddell (w. Bernard Hill as Magwitch and Clive Russell as Joe).

[warning, these are a tad spoilery for those unfamiliar with the novel. So, read the novel. now. Okay?]

Unlike the 1981 adaptation we discussed the other day, this is a technically beautiful and visionary realization directed by Julian Jarrold.  It is very true to the story and fulfills most of the periphery storylines in the narrative.  Moreover, it is dark and gothic and the materialization of the troubled Miss Havisham amidst a dusty conglomeration of stopped clocks and murky mirrors to a bewildered young Pip is the stuff that slow-ticking horror films are made of.

Pip's first encounter with Magwitch is shown in rough, hand-held vision in the first few moments of the film with the rest of that fateful meeting unspilled in a dream-like flashback when Pip, previously on the marshes and near the cemetery, is back home.

Both Mrs. Joe and Joe Gargery are respectively well-played.  Clive Russell's Joe has a heart as big as his physical stature and it seems almost often near-to-burst; mostly with pride for Pip ( the scene where Pip and Joe are sitting by the hearth; Pip showing Joe a badly misspelled missive he has written him on a small slate recalls one of the most tender moments of the novel). The younger versions of Pip, Estella and Herbert Pocket are physically well-paired with their older incarnations.  Likewise, the transition of the story from younger Pip's life to the passing of age which ushers in older Pip is done with extreme subtlety: young Pip is hammering away at the forge in the first moments of his apprenticeship and slowly, the scene cuts to a larger hammer and a stronger arm. I really, really liked the Herbert Pocket in this adaptation: affable, open and generously-hearted he, like Biddy, Joe, and some extents, Wemmick and Magwitch, round out the only redeemable purveyors of kindness and grace in an otherwise depraved puppetry of tricks, money and greed.

Things the Adaptation Does Well:

->slight, small recurrences from the novel: like Jaggers continually washing his hands and Wemmick caring for "the aged"

->Plays well the idea that had Pip not been introduced to Miss Havisham and Estella, he never would have found anything lacking in his eventual apprenticeship to Joe ( or would he have? his yearning for education seems to suggest that he might have stumbled upon this past anyways)

->My mom mentioned ( and quite rightly ) that Pip is quite lost.  Reminiscent of Eliza Doolittle (My Fair Lady) after the ball and as she leaves Henry Higgins' to wander the streets and rediscover her flower girl days in Covent Garden, she recognizes she is not really fit for her new life or her old. Likewise, Pip is lost from the moment he enters Miss Havisham's through his fragmented apprenticeship to his realization of his expectations in London.  He doesn't really belong at the forge; he's unsuited for marsh life and yet his life in the city is built on a sandy, unsturdy foundation. (Mom also mentioned ( she was very helpful at weighing in on this ) that Miss Havisham seemed a tad young in her estimation; but that the costumes were spot-on ...moms are very fun to watch BBC miniseries with, FYI)

->I quite enjoyed Magwitch and how beguiled he was with his new "creation": the fixed idea that Herbert speaks of when he recounts what Pip has been to Magwitch in his Australian solitude. Magwitch's features soften when Pip speaks so politely with him that first day on the marshes and he admits to loving Pip as more than a son when the ungrateful Pip shies away from his patronage.  To watch him carefully tuck a shivering Pip under a blanket, to watch his eyes sparkle as he sees the result of the education Pip has had on his account (Pip reciting the Odyssey in Greek, as one example), is very, very moving.

However strongly Magwitch presupposes Pip's loyalty and affection, however, Pip's true father figure remains in the presence of Joe.   Joe, here, is just as heart-breaking as he always is: merely standing there as Pip completely forgets their connection.   In the interest of time, they slightly alter Pip and Joe's end reconciliation and have Joe find Pip in debtor's prison, delightedly moved to see him and having paid all of his debts.

->Biddy is also sweet and wonderful in this adaptation: watching Pip with the unrequited devotion and estimation true to her character as they grow up together and then transposing her love on the certainly worthy Joe at the end.

->Excellent production values; glorious sets and lighting; flashes of colour against the bleak, cobblestoned backdrop of London; Dickensian parallels shooting from the Butcher's shop to a line of soon-to-be-hanged convicts at Newgate, this is top-notch.

However, even as it remains one of the strongest adaptations I have seen to date, it is not perfect. It does not fare as well as the excellent, near-unmatched adaptations of Bleak House, say, or Little Dorrit. 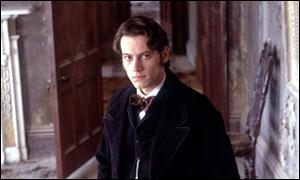 Perhaps there is something about Great Expectations that just evades the screen. While there are so many marks in its favour, there is something about the tangible, strong and at times heartbreakingly redemptive spirit of the tale that seems best captured in words and pages. Which is why, as aforementioned, we so eagerly await the upcoming 2012 adaptations. I  want to see Great Expectations done perfectly right. For the time being, this is a worthy offering.

And Ioan Gruffudd is in it.  Right? Right.

I haven't seen this adaptation in so many years, I barely remember it. (And I'm not even sure I saw the whole thing.) I really need to see it again!

it's really good. probably the best of the adaptations i have seen and still NOT GOOD ENOUGH! I have high hopes for 2012, people. I do! I do! It might just be unfilmable. nothing moves me as the book does.


but they have done such a great job with my other dickens favourites ( little dorrit, our mutual friend, even that AWESOME tale of two cities from the 80s!)