Litfuse Blog Tour: the Butterfly and the Violin

I really enjoyed the treatise on the artist’s spirit surviving the most treacherous circumstances in this talented debut by Kristy Cambron.

In present day, Sera and William overcome heartache and find common ground in their search to exhume the histories hidden in a passionate old piece: a mournful and melancholy portrait of a violinist, Austria’s sweetheart, Adele Von Bron, reduced to the undignified squalor of Auschwitz.

In the past, Adele’s story is played out with equal parts funerary minor and joyous, gold-edged Vienna waltz: a woman passionately in love with a man wrong for her, the apple of Vienna’s musical eye. Juxtaposed: art and music intertwine to create a tapestry of hopeless circumstance, life and love beyond the gritty horrors of a concentration camp.

[Can I take a moment just to talk about the whole Vienna Prelude-ness of it all! Like, frig! We all know VP was my first Christian fiction book ever and it inspired my entire life and my lifelong dream trip to Austria and my obsession with the glory of the world’s most too-much-whipped-cream city Vienna. I love the haunting refrains of music clashing with the martial law of the Nazis: descending darkly upon a glittering city and urgh! …. So awesome. Here's my Christian Classics edition featuring VP] 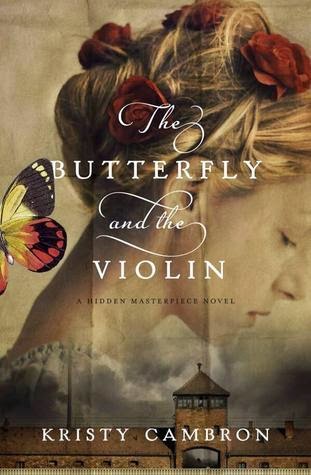 Cambron excels at interweaving intensive research into her fictional canvas. This is made more potent by her obvious affinity for any artist. Her passion for art ( a subject she has obviously studied intensively ) as well as her passion for glistening European locales such as Vienna and Paris are evident in her lavish descriptions.

Cambron has put forth a lyrical and naturally well-written story here and the writing doesn’t seemed forced. To add, she has expertly plotted both the contemporary framework and its historical counterpart and often the action in the modern day sequences mirror the burgeoning relationship between William and Sera. If Vladimir and Adele pursue a moment to dance, then we find William and Sera at a wedding. If Adele ponders love-lost, then Sera, in modern context, is seen ruminating on her past love.  She fits both pieces of the puzzle together well.  When it comes to the realization of the portrait’s mystery and all loose ends are tied up, the reader is left with a satisfactory sigh.  What is that line--- is it Chekhov? –about not putting a gun on a table in Act I if it doesn’t go off in Act III? And so it is here: a breadcrumb trail of little mysteries that all resolve at the end.

I also really liked the equalizing nature of art pursued.  In the camp, art of all kinds and mediums is excavated in a hidden warehouse.  The artists: visual, written, and with the addition of Omara and Adele’s orchestra, musical, risk their lives to thumbprint their creativity on a vapid space and reclaim the passion and burning desire of expression. They will be remembered: somehow in some way.  To add, artistry is just one more equalizer in a realm that vanquishes social class. Adele is from a highbrow family, late of parties and money, but, like everyone else, the concentration camp strips her of social class.  She cannot hide behind her name and family. There is one particularly poignant moment where interred Omara and Adele play in their prison finest for Nazi officials who recognize Adele for her former stage presence. The strange and exhilarating clash really resonated with me.   By the end, when Adele is forced to play for what will be her last time publically, she shows the same defiance: even undergoes a bold act that warrants severe punishment.

Butterfly is a stirring, well-written and literary debut.   However, a few things gave me reservation.  With the exception of Susan Meissner, I am not a huge fan of contemporary frameworks bordering historical stories.  I tend to want to get back to the historical: as that is my first passion as a reader.  William and Sera’s story was technically well-written, but I didn’t feel for them and their contemporary romance took me out of the magic that was taking place in 1940s Europe. Indeed, I kept hoping I could get their parts over with to get back to the real story. It is far more interesting. To add, I sensed Cambron also much preferred her historical characters and settings and the passion infused in Adele and Vladimir and their counterparts just made William and Sera’s strand-of-story pale in counterpart. Their characterization, as well, lacked the same dimension of their historical reflections.  Because I will be reading Cambron’s next ( she possesses a gifted pen and a lot of potential ), I am hoping that I will find sterner spiritual truths apparent throughout. In Butterfly, the overt Christian themes were slightly dormant until the latter half of the book and the subject matter loaned itself to a far stronger perusal.  I will, however, note the sage and inspired wisdom of Omara, orchestra leader, who reminds us of art as worship.

Insightful, as always, Rach! Loved this one, too :)

Looking forward to the sequel!

This is a very good tip particularly to those fresh to the blogosphere. Short but very accurate information… Thank you for sharing this one. A must read post!

Nice post. I learn something totally new and challenging on websites I stumbleupon every day. It's always useful to read through articles from other authors and practice something from other sites.

Hello there, I do think your site could be having internet browser compatibility problems. Whenever I look at your website in Safari, it looks fine but when opening in IE, it has some overlapping issues. I simply wanted to give you a quick heads up! Other than that, fantastic blog!
white belt