Promise me This by Cathy Gohlke 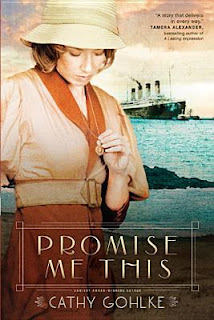 Michael Dunnagan is a street rat. Abused my his Uncle Tom, huddling his nights away wherever he can find crude shelter, Michael’s long given up any hope in finding love or warmth.

He is floored when he meets the kindly Owen Allen, gardener and lofty dreamer who offers Michael odd jobs and shelter until he leaves sail on the Titanic to a new life in America.

Having met and experienced the kindness of Owen and his beloved sister Annie, Michael recognizes he has nothing to stay for. He stows away aboard the mighty ship and is immediately reunited with his new friend, who pledges him brotherly affection, safety and a life in the new world.

On the night of the Titanic’s sinking, Owen Allen trades his life for Michael’s: impressing upon him the importance of seeing that his seeds and plants grow on his aunt and uncle’s farm in New Jersey and that his greatest desire, for Annie to find her way to America, become Michael’s most fervent cause.

This ultimate sacrifice not only affects Michael and Annie from a spiritual and emotional standpoint; but joins them together in a type of makeshift family that transcends blood ties.  While living and working for Michael’s aunt Maggie and her endearingly brusque friend Daniel, Michael learns more of how Christ’s sacrifice was reflected in Owen’s last action of grace. Annie, alternatively, wades through the darker places of bitterness to find ultimate forgiveness: not only for the young man who returned while her brother perished; but also for the cold-hearted aunt who would squeeze the last of life out of her future.

Gohlke does an exceptional job at weaving the events of the Titanic and its pre-boarding in a swift narrative canvas that urges the reader along.  Following the prelude of the main story and Owen’s final act of grace, she does well at delving into the terse aftermath of the tragedy while slowly hinting to the Great War about to unfurl.  Readers who are awash with a fervent passion for the Edwardian world of Downton Abbey will cherish this story.
From a Christian fiction standpoint, it is refreshingly literary; while still weaving an intricate and delicate mélange of characterization and backdrop that will have readers turning the page at rapid pace.

Gohlke is, in short, a beautiful writer and this moving story was made more potent still by her deft skill for narrative arc and characterization. Indeed, friends, this is Christy award-winning material. The motif interwoven of Owen’s plants and seeds taking root and creating beauty on either side of the Atlantic is also well-met with Gohlke’s soft and subtle inclusion of their importance in the plot and in the thriving and growth of the characters.

One might think that the major action would finish with the monumental death of an important and beloved character: rather smartly Gohlke uses the legacy of one act to prove time and again how Christ’s love lives on though his paramount sacrifice left a wake of tragedy and loss.

Compelling and moving, this is by far one of the best and most competent novels I have read this year: in and out of the CBA.

Email ThisBlogThis!Share to TwitterShare to FacebookShare to Pinterest
Labels: tyndale

Thank you, Rachel, for this eloquent review of Promise Me This. You've captured so many facets of this story and its characters--I'm truly honored.