All Things New by Lynn Austin (aka Extra! Extra! Lynn Austin makes me a better Christian)

WARNING: major Lynn Austin love here. GAH! rambles and odes and such... it's rather pathetic ;) 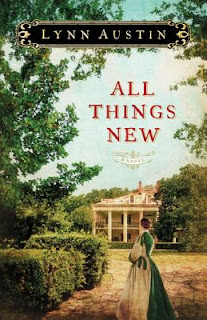 Lynn Austin is no stranger to work and research surrounding the Civil War.  The 8 time Christy Award winner scored two such awards for her Refiner’s Fire trilogy which exceptionally offered readers with three books centered on three different viewpoints: the North, the South, the Slave.

In the Restoration piece, All Things New, Austin has married these 3 three perspectives through new characters and circumstances.  The war is over; but its ramifications have left the South shattered: faithless, hopeless and poor.  What was so hard fought for on both sides seems pale when compared with the devastating loss of life and lifestyle.

For White Oaks plantation owner Eugenia and her daughters, Mary and Josephine, the world is hardly recognizable.  Where the slaves used to work their farm and ensure food was provided and parties balls overseen, this new found emancipation forces a brand new necessity for getting one’s hands dirty. Indeed, the sullying of hands is a major motif in the novel: as Eugenia slowly but surely watches her daughter’s dainty fair skin become blistered and callous with work of survival.

After years of distance, doing back-breaking work for their master’s well-being, freed slaves Lizzie and Otis can finally live together as man and wife.  But, while they still maintain a livelihood on the plantation owned by Eugenia and run by her ex-soldier son, Daniel, they are torn between a conglomerate of former slaves vying for sheer freedom and the bleak helplessness at having the freedom to leave but lacking the direction to go.

Alexander Chandler, a Quaker turned Yankee soldier aches to make amends to his Creator for his part in the hopeless destruction and bloodshed. Acting as agent for the Freedman’s Bureau, he encourages Lizzie and Otis and others of their kind to start anew.  As well as starting a new school that Lizzie and Otis’ children attend, he acts as liaison between the freed slaves and their previous owners in an attempts to encourage them to work peacefully.

Everything, every single thread in this compellingly readable tapestry is one born of chaos. I cannot fathom the confusion and drastic change of living that occurred for Americans on both sides of the War (the losing South, the Winning North) nor for the freed slaves so beholding to their masters and their degrading way of life that an evening walk seems to instil a sense of breaking a law now dissolved. While Josephine is young and able to adapt to the changes and, subsequently shape her character and drive in a way never imagined by questioning and challenging her uprising to this point, so Eugenia is stuck in a past that she can never resurrect: sadly scrambling to keep up appearances, make calls at neighbouring plantations depraved of their glory and organizing balls to assemble the ragtag crew of the poor and defeated.  Unable to accept that the South’s glory days are gone, she acts as a kind of Ashley Wilkes’ : nobly holding to the past while unable to see the new world as it unfolds before her.  Readers will at times find her stubbornly ridiculous; outwardly wanting to lash at her condescending tone and her inability to see the harm she unintentionally causes. But, here, here is one way in which Austin excels. She can make even the most seemingly unsympathetic character understandable. Slow, sure changes in character equate in massive leaps strode forward and Eugenia leaves so much of her social certainty behind.

Josephine’s tale is by far my favourite: mostly because Lynn Austin’s young women as they confront spiritual uncertainties resonate most strongly with me.  Josephine is, like the cream of the Austin canon, a perfect collision of modern questions and a well-researched time period. She’s effervescent, extremely relatable: a firecracker on the verge of something wonderful even as the old life threatens to pull her back.  Josephine is, at the beginning of the book, eclipsed by her loss.  The loss of her way of life, the loss of her side of the War, the loss of her father and brother.  Even when Daniel returns, he is not as she knew him and retreats sullenly into himself emotionally scarred by what he has seen and heard.  When she makes an unlikely ally in Alexander Chandler she recognizes him as a sounding board for the questions rapidly firing in her head.  While Chandler may represent the winning side, so he poses questions about God, faith and humanity…most importantly, her future… that Josephine is aching to resolve.

The relationship between Josephine and Alexander is worth reading alone.  In gloriously slow and lugubrious fashion, Austin metes out significant and brief meetings. Each time, we learn a tad more about both as individuals as she strings us along: their silences as telling as their conversations.  In a recent interview with Novel Crossing, Austin mentioned that she often writes large patches of dialogue first. Her first draft, she admits, is often a plethora of dialogue wherein she revisits and hashes out and patches together connecting scenes.  This is so telling in the propensity of her dialogue to resound off her page; but also testament to her genius at writing character.  These are character driven stories.  Much as Josephine clings to her father’s mirror ( a kind touch featuring Alexander is brought to light when it comes to this mirror), so do these compelling and strong scenes hold a mirror up to ourselves.

Lynn Austin does best when she asks universal questions  through her fiction. She often doesn’t answer them. She poses them, she encourages one to fight and challenge and wrestle with them as her achingly relatable characters do.   It is no secret that I love Austin and I encourage readers who try her to recognize that she works on more than one level. First, she is a universally admired storyteller. She has dozens of women readers ( in the States and Canada and beyond) who recognize she has a knack for just a great narrative. Her stories will grab you. She doesn’t trip you up with dense and muddled descriptions; rather she leans across and whispers in your ear.  It works well, it’s a style her own.

Secondly, she is unique enough to have what I call a  Lynn Austin Moment. It occurs in every book in the same vaguely delightful way that the Ernst Lubitsch touch pervaded his classic films.  This is that one reassuringly blossoming moment when you know that you are reading a Lynn Austin novel. It’s a delight, it’s a spark: it’s a scene so unique and cherished and wonderful that you just want to live in it a moment.  It’s for this reason that people read books and you will find a plentitude in Austin.  I don’t want to give away MY Lynn Austin moment in All Things New because I want readers to discover what it can be for themselves.

Finally, and most importantly, she is divinely inspired.  I don’t usually get so mushy when I dole out the Christian book reviews; but Lynn Austin’s novels tend to meet me where I am spiritually at the exact moment I am reading them. It is almost mindblowing how spirit-filled these books are and how they speak to me on so many levels and challenge me and encourage me in ways I didn’t even know I needed challenging and encouraging.    I get mocked ( good-humouredly) for my Lynn Austin love; but if readers could possibly fathom the way that God speaks to me through her work, they might give me a bit of a break.

I yearn for every believer to find the same type of solace in fiction.  I believe that God speaks in many ways, mediums, forms. For passionate readers why wouldn't he use intelligent storytelling as a portal?  Lynn Austin is gifted.  Not just in the way that we mention the gift of any artistic storyteller; but in her ability to strengthen her readers’ spiritual walks.  She opens our eyes to things: They are often things that are staring us right in the face; but they hit me doubly so when I am in the midst of her pages.

Austin’s books validate me as a believing woman. I know I am not alone. I know that I am on the right path. I know that even when I feel too-outspoken, too awkward, too imaginative, too different that I have found an imaginative construct wherein I am validated. I am valid. My life is valid. God made me the way I am. I, too, can have a purpose: as flawed and strange and outspoken and bewildering and unladlylike as I am.

She can silently and gently preach through her words forever that God uses women of all types and circumstances in all times (married or single, educated or not, strong and outspoken or docile and meek) and that ALL are worthy.  This is her thesis (I’ve told you all this countless times before).  And there are times when I look to my “big three” of female author-hood (Austin, DL Sayers, Catherine Marshall) and thank the good Lord above for how they quench my thirst. Because, honestly, fair readers-who-are-probably-bored-of-this-long-winded-ramble, I sometimes wonder if I would still be a believer today, given time, circumstance and the confusion of being an independent woman in the Evangelical sphere, if it wasn’t for their meeting me where I’m at. Strangers, yes, using fiction to resuscitate me.

I’ll never really have the  guts to write Lynn Austin a personal email. I would get all flustered and not know where to begin …. But I want you to know how she has changed me, challenged me, healed and consoled me. I think the right book ---the right author---can find the right reader in providential bliss--- and I want you to give it a chance. She might just be the balm you need.  This story is far more than historical fiction.  But, that’s the beauty of Lynn Austin, isn’t it?

Beautifully said. I hope Lynn Austin stumbles across this someday. :)

i have a feeling that i will be revisiting this book again on the blog. the themes of restoration and of joy vs. happiness are so strong. this book makes me smile randomly for no reason. #booklove