I think we all know what I think about Lynn Austin ( she has a tag tab on the side of this blog and you can read me go on and on and on about how she is just the best).  You could argue that there are writers who have a more poetic style of prose, or a more literary style, or deeper thematic resonance; but you can't argue against her completely unique and special touch. She has a natural gift of narrative storytelling that is unparalleled in the Christian historical market. She has the "Lynn Austin" touch: an a-ha moment readers experience when they stumble upon the moment that makes a Lynn Austin just that!: a Lynn Austin novel. I revel in reading her books because I know I will come across that enlightening feeling. 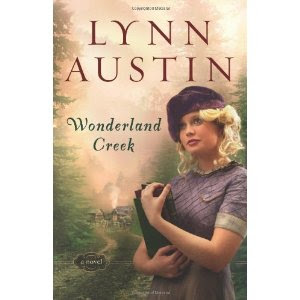 As previously mentioned, Austin's ongoing thesis represents women of faith in time periods which test their personal and spiritual independence. Austin validates all women's roles: from battlefield to domestic; relying on the Providential to steer our strong young women into the part of the world that will best assert their natural gifting and enlighten them with the knowledge of faith she extends softly to her readership.

Her female characters are often cut out of the mould and so human that their plights become immediately relatable no matter the time period they are placed in.  Austin's grasp of verisimilitude and her knack of historical resonance; as well as her dialect, dialogue and characterization are one-of-a-kind. Never one to pass on an original idea, Wonderland Creek uses the compelling backdrop of Acorn: a small coal-mining town in the primitive mountain wilds of Kentucky. Here, Alice Ripley, our intrepidly imaginative heroine, is lost in her own Wonderland as she discovers a civilization to whom the Great Depression has seemingly untouched: so poor and removed are its inhabitants from the news and modern life.  Alice first visits Acorn when cutbacks at her beloved job are rendered inevitable due to the Depression. Having recently been dumped by her boyfriend ( tired of her bookwormish ways and high imagination: she is even caught reading at a funeral), Alice is left with too much time and listless frustration. She leaves her minister father's house and traipses across state lines to donate books collected by her small Illinois town.  Here, she comes face to face with Leslie MacDougal: the librarian she had corresponded with via letter.

Knowing nothing about the town and failing to realize that Leslie MacDougal is actually Mack: the tall and overbearing man in charge of Acorn's small ramshackle library and its roaming librarians, Alice is unintentionally stuck in a world without telephone, transportation or radio.  Settling in under the strangest of circumstances with Mack and the enigmatic  and aged healing-woman, Lillie, Alice takes a job as one of a pack of mobile librarians: who ride horses and satchels up the eastern mountains to deliver the books and magazines which provide the only education and entertainment to the impoverished, wide-spread residents.  The librarians are funded as part of F. D. Roosevelt's 1933 "New Deal" program: established to try and alleviate some of the harsher ramifications of the Depression.  Mack institutes the program as a means of providing a handful of women with employment in an attempt to support the most destitute of families in the area.

Alice fails to anticipate the on-going feud between two families and the violent overtures it will take on her time in Kentucky.  Suddenly a heroine in a real-life murder mystery, Alice discovers that the greatest adventures lie far from the pages of her favourite stories.

Alice is an immediately recognizable figure to all of us bookish types.  She is a true bibliophile: most enraptured by her eventual hero when she finds he lovingly caresses and smells the pages and leather of a book much in the same way she treasures her own.  The mystery and espionage as well as the greater statement against corrupt mine officials and the forming of unions make this a heart-palpitating story that will be difficult to put down. I read it in two sittings and was riveted the entire time.  This is not uncommon for me as I dive head-first into one of Austin's captivating yarns.

As well as writing jump-off-the-page heroines and wonderfully-written tales, Austin reigns supreme when it comes to painting delicious heroes. She is a master of slow-churning, hard-won romance and some of her heroes (all decidedly different; yet made of the same, stern, strong and moral stuff that pulses through each of her books) are my favourite in all of Christian fiction (I think of Doctor James McGrath in Fire By Night and Silas McClure in A Proper Pursuit, to name just two) and Leslie MacDougal is no exception. In fact, Mack reminded me a lot of Barney in The Blue Castle: just as Valancy has a winsome guide to steer her through the mystical woods; so Mack can lead the equally dream-like Alice through the woods like a book.  His faraway wood cabin and his dapples as an author help paint the Barney motif.  Moreover, a dimple  when he smiles and overlong hair which surprises Alice when it first receives a long overdue cut.  He's really quite dishy!


If you haven't read Lynn Austin yet; well, you are missing a treat.  Every single one of her novels is a decidedly different delight and she remains the strongest writer in the Christian market. She has an interesting way of painting faith in a subtle and moving way that will challenge you: sometimes without your wholly being aware of it until days after.  I will read this, as I do other Austin novels, to shreds.

Visit Lynn Austin on the web and peruse ( and then buy) all of her books. She has won more Christy awards in fiction than any other author and they are always well-deserved.
Posted by Rachel at Tuesday, December 27, 2011

I have had Lynn Austin out from the library a couple times, but never found time to read her. One day!

Well I finally reviewed this one myself and no surprise I loved it too. Excellent review, I love your passion for her books! Can't wait to find out what she has waiting in the wings next!