A Study in Sherlock: A Game of Shadows

I saw Sherlock Holmes: A Game of Shadows today with two very good friends.  I was highly anticipating this film as, despite the franchise's inauthenticity, I quite enjoyed the first instalment: mostly Guy Ritchie's gritty depiction of an always-under-construction- London in all of its tinker-toy, industrialized sepia light and for the chemistry between Robert Downey Jr.'s Holmes and Jude Law's exceptional Watson.

Jude Law's Watson was introduced to me after a long Sherlock draught and before I saw the (definitive?) modern adaptations starring Benedict Cumberbatch and Martin Freeman.  I am a big Watson fan and I always hated his portrayal in the Rathbone films and, well, any subsequent film which featured him as a pudgily rotund foil and not the man-of-action and intellect he is.  Law's Watson was a breath of fresh air. He was resourceful, quick-witted, smart and ready to spring to action... much like the Watson of the books. He was the perfect antidote to Holmes' manic excitement and depraved actions.  Thus, I was excited to see Law revisit the character alongside the perfectly cast Kelly Reilly as the beautiful Mary Morstan. 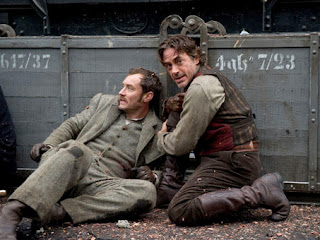 Also, I felt that while the original strayed from the conceptualization so many of us have in our purist imaginings of the Canon, it did incorporate small, slight instances to peak a Sherlockian's interest. Here, this homage was more realized.  The film's core is bookended by Watson's episodes at his trusty type-writer tapping the story of The Final Problem. While this "final problem" strays significantly from the short story, the main player, Moriarty is drawn in cold, calculating light by the gravely eerie Jared Harris: perfectly cast in the role.  While the BBC Sherlock painted Moriarty in a manic, psychopathic way: this Moriarty is very much the intellectual match of Holmes: their wits at battle perfectly culminating in a tense chess game high atop the Swiss Alps with the ripples of crashing fall cascading from the ridge to the vapid cavern below.  Think Reichenbach? Think right.   The story also plays with A Scandal in Bohemia: well, at least nods to it as a principle crime takes us to the opera, to the Continent and to an intricate web that could unravel the whole of Europe, see the ultimate downfall of a Crown Prince and climax in a World War.   This is 1891 London; but Moriarty hints that Europe is on the hedge of great disaster --- and much like Sherlock ruminates on the changing climate and tides in His Last Bow, so the audience is given a tell-tale maze that will force us to consider the approaching Great War, the burgeoning practice of machinery in combat and how Sherlock and Watson might play into this changing tide.
As with the first instalment, the film is at its weakest when it attempts to incorporate female characters into the plot. With the notable exception of Mary Morstan (who is credible and has every canonical right to be in the script ), Irene Adler is still problematic (largely due to the liberties they take in her sexual relationship with Holmes) and a new companion piece, a gypsy named Sim, is proof of screenwriters grasping at ways to bring females into the masculine world of Holmes. They needn't have bothered.  Females have loved Sherlock for years and I, for one, am contented without the unnecessary female inclusion.

While Jude Law looks surprisingly like the Paget illustrations of Watson and keeps mostly to character, Robert Downey Jr.'s Holmes remains problematic.  He fails to achieve the meticulous hygiene and detached calculation and assumptive distance of Sherlock Holmes while playing into humorous elements.  Holmes is not without humour; his sense of irony and sarcasm is very acute; but Downey Jr. errs in mistaking this humour with his need to cut through the more automaton-tendencies of the great detective, slice pre-possession and attempt to endear the audience. Again, this is a mistake. Readers love Sherlock Holmes. 21st Century viewers love Cumberbatch's realistic portrayal and seem to find that Watson steps in as everyman mediator allowing a more purist portrayal of the detective to be easily accessible, fascinating and mind-bending.   Downey Jr. is best when in the wily game of wits at the end.
Ritchie could have played more at outlining for the viewer what Sherlock was seeing: what his eyes were drawn to and what scrapes and screeches his attuned ears gleaned from a melange of noise.   This particular manic deductive-skill was presented more than once in the first film; but not as much here.

As in the first, however, and the main reason I forgive Downey Jr. is his inescapable chemistry with Jude Law's Watson. Their love and camaraderie cannot be forged. It prevails here again in all of its frustration, bickering and succinct synchronicity.  There are some wonderful moments attesting to the unbreakable and almost impenetrable bond between the two and that makes me shrug Downey Jr.'s other liberties of character off.  Further, Ritchie makes very sure to present enough to whet a purist's appetite while re-imagining the iconic characters in an almost alternate-universe. If you keep this in mind and you allow yourself to relax and acknowledge that Downey Jr. is quite the opposite of the painted Sherlock Holmes, the Holmes of Doyle's imagination and Brett and Cumberbatch's excellent portrayals, then you will have a lot more fun.

This world is peppered with Steampunk, of automobiles driven by be-goggled drivers, of machines and harsh noises and gritty discordant music slackening popping streetlights and glistening cobblestones.
Familiar faces like Lestrade ( a brief; but important cameo) and Mycroft Holmes (cast physically perfect in Stephen Fry) and Mrs. Hudson, not to mention the little dog Gladstone, return to delight.
The setting is a character, the dialogue can be clever and pay secret homage and even a name-drop or two (Col. Sebastian Moran, for one) can keep a Sherlockian carefully watching despite the errors and inaccuracies.
I realize that this is not everyone's cup  of tea and there are several Sherlockians who cannot bring themselves to partake in these adaptations. I do understand where they're coming from. I guess I have been successful in watching and enjoying them because I take them with a grain of salt. On the one hand, they are introducing an entirely new generation to Sherlock and they are weighted enough in the source material to add surprising credibility.  If not credibility to text, then definitely credibility to implication and spirit.  As mentioned, the chemistry and friendship between Watson and Holmes is played with unabashed affection. It is rather touching. Their glances and quick quips are so matured! For authenticity and to delight my purist's heart I must, ironically, seek out the Steven Moffatt adaptations with the near-perfect Benedict Cumberbatch: the actor who, next to Jeremy Brett, does best at recreating mentally the Holmes of my childhood.  Watson is played well here and is near spot-on physically; so I have little-to-know complaints in the Jude Law department.   Moriarty is a nice nod to his literary counterpart.   It's not perfect and there will be several, several friends of mine who will not budge on it; but I liked it. It's cracking good fun and I wouldn't mind seeing it again. 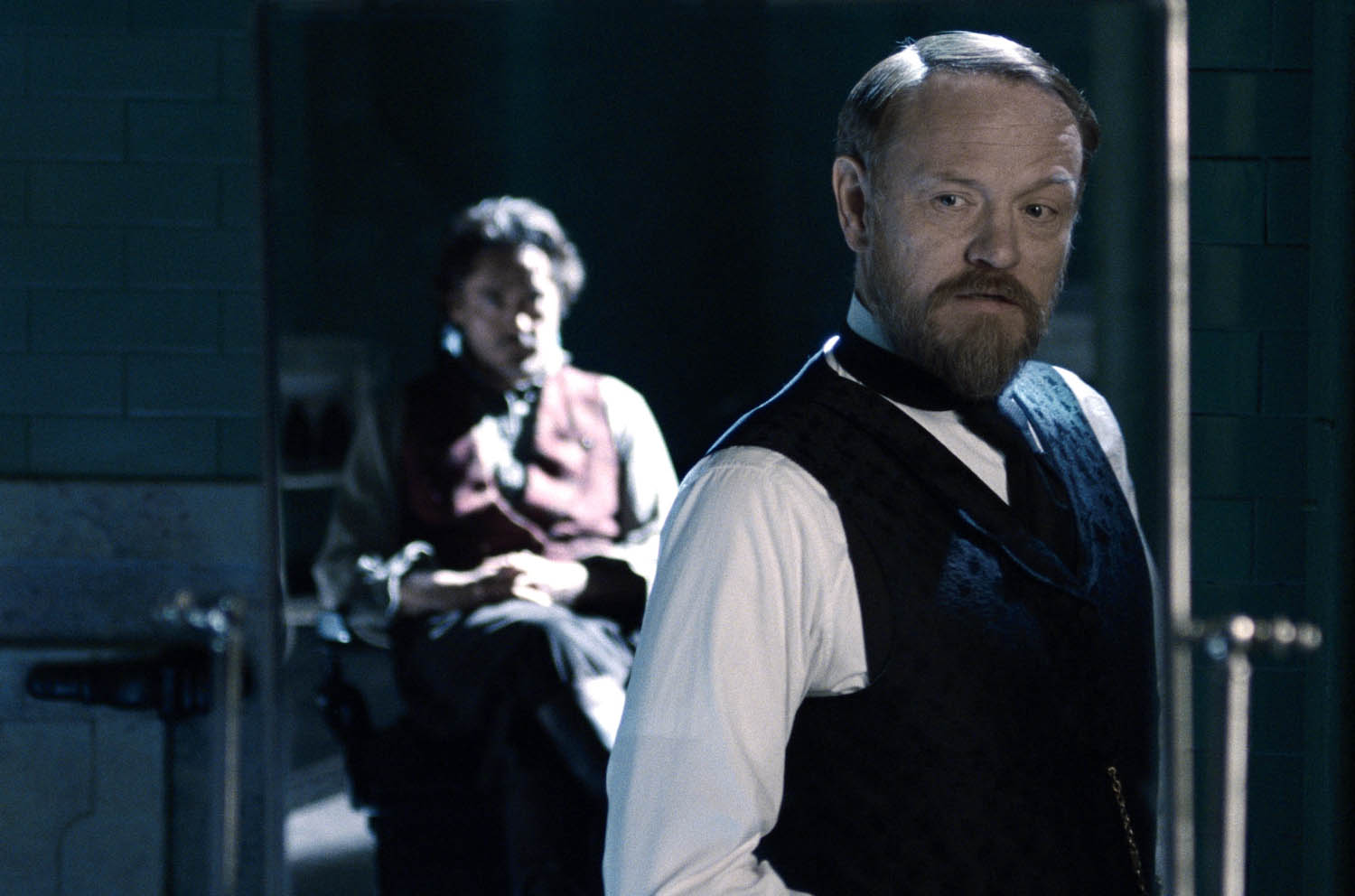 Remember when I was at the Reichenbach Falls?  They do that part very well indeed.
Posted by Rachel at Sunday, December 18, 2011

Email ThisBlogThis!Share to TwitterShare to FacebookShare to Pinterest
Labels: sherlock; a study in sherlock

I'm one of those Sherlockians who cannot bear these adaptations. I tried the first installment -- twice. Didn't stick, and in fact I was rather offended by it. No thanks, I'll stick with Sherlock.

i love the overt bromance in these adaptations :)

Yes, the first movie was baffling to me because of the female inclusion. The guy had never read any of the books, so he didn't really see anything wrong with her. I kept trying to explain that didn't happen... I will probably see the second one, though... It was fun otherwise.

I finally saw this film today, and ohmygoodness I LOVE THE HOLMES/WATSON bromance. Downey and Law are really too perfect together on-screen. :)