This is going to be a bit of a differently shaped review for me.

First off, I am not going to rate Dogwood because I don’t know how best to. If the rating were for quality of writing alone, then Fabry would get 4 stars. He is exceptional at spinning a slow, rumbling West Virginia Yarn. He puts me in mind of Faulkner and Steinbeck and I have no qualms about his prose.


[somewhat irrelevant aside: Fabry also *cough* shares my LOVE for Harper Lee as is blatantly evident when he remarks on Atticus charming ( or attempting to charm) the surly Ms. Dubose in her front garden. I caught that, Chris Fabry. Just as I caught your speaking to a “midnight bathroom pilgrimage” in June Bug--- those are the exact words Scout uses when lying awake afraid that Atticus will notice Jem has gone to retrieve his torn trousers. Maybe its just an American phrase, but to me, I know my Lee) ]

If the rating were for best, flummoxed end since the days when M. Night Shamalyan wrote good movies then he would also get 4 stars. This book has an incredible twist. Even when you think you have figured out the “shock”, you realize you haven’t and you re-trace your steps by fanning pages backward in attempt to find any hints missed. 4 stars.


If the rating considered breadth of voice and the validity of four different narratives it would also get 4 stars ( though I tend to think that one---or at least two--- of the narrative voices could have been whittled away; but that could just be my reticence for a multiple-voiced structure).


But, I cannot rate Dogwood because I usually rate on my overall, post-reading euphoric, oft-jubilant impression.

That inherent sense-- that Ahh! This book spoke to me and it will to you and yay for literature


I am not sure what Rachel the person thinks of Dogwood. Rachel the Reader is impressed. Outside of the fact that it is an exceptionally well-written novel and completely worth your time and bursting with literary merit (I can think of few of its ilk or quality in Christian literature), it left a bad taste in my mouth. Not, of course, from the actual novel but the events and the end they catapulted into.

This reading experience (it gripped me in a tangible way so that I exhaled and felt immediate relief when the last page was turned so experience is the right word) was terse and melancholy. Bravo to Fabry for exploiting emotion on every page. But, rather than feel redeemed by the end, I felt somewhat hollow.

Certainly the book’s pivotal moment involves a sacrifice of great magnitude and grace: but at such tragic ramifications I was left deflated throughout.


I loved the character of Will Hatfield. I wish they made them in “real life”, so to speak. Recently released from Prison, mild-mannered Hatfield’s struggle to reintegrate into society reminded me of Jean Valjean and, thus, June Bug (see previous blog review).

I felt very untrustworthy of Karin, Will’s former flame but the realization of the novel in its entirety spoke to my bias.


All-in-all: I am perplexed, I am flummoxed, I am bewildered and a little saddened and frustrated and “what the heck!?” but that in itself is testament to the book’s QUALITY. For it is only in true reading experiences that the world you temporarily inhabited on page saturates your real life--- if only for awhile.

Another shout-out to Chris Fabry!: two books in one week read by me and both super! I am just needing some time to wrap my head around Dogwood. Perhaps, when I put my finger on the elusive “it”, I will come back and stamp a few stars on it.

by the way: this book won the Christy! 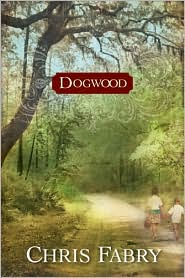