In Which....OMG DEANNA RAYBOURN IS ON MY BLOG

Deanna Raybourn (the radiant and glorious and wonderful and snarky and deliciously funny and intelligent and witty and...GAH!.... and.... *sentence truncated due to too many appropriate complimentary adjectives and not enough time* ) is on the blog today.

I bookcrush SO hard on her books which are like a knowing, wily and sly wink to we readers who know exactly what she is doing and live on her fare as if it our sustenance, our oasis at the brim of desert barren Damascus (or, you, know Victorian England).

Read my review (actually, loquaciously rambly rave of love ) for City of Jasmine 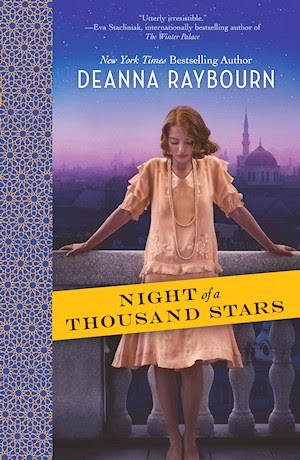 Now, we return to 1920s Damascus in Night of a Thousand Stars which I bought on release day and stare at lovingly because I am too afraid to start it, lest I read it too fast and finish it.... ahhhh l'amour!


1) We’re writing a Hallmark Christmas movie. Who is the hero? He’s a businessman who decides to play Santa for a group of orphans and gets stuck in the chimney. The fireman who pulls him out just happens to be a woman…

2) You can transpose Sir Percy (the Scarlet Pimpernel) into any era. Where does he end up? NOW. Can you imagine the horror of Percy Blakeney trying to load apps onto his iPhone? Or manage an infinity scarf? He’d be traumatized, staring at hipsters through his quizzing glass as he waits for the barista to finish making his caramel macchiato. It would be delicious.

3) In a battle of wits a la The Princess Bride (okay. Maybe not). Who wins: Gabriel (City of Jasmine) or Sebastian (Night of A Thousand Stars)? Trying to referee that particular smackdown would be as ill-advised as starting a land war in Asia. No way am I going there.

4) Can I marry Gabriel, please? If you can take Evie, he’s yours. But remember—she shot the man she loved. IN THE CHEST. Come prepared is all I’m saying.

5) I felt that there were hints of The Scarlet Pimpernel informing City of Jasmine. Is there a wisp of a classic romance in Night of a Thousand Stars? Oh, bless you! I adore The Scarlet Pimpernel, and yes, Gabriel is a definite homage to Percy. My first true “character crush” was Percy, and it never really ended. I blame Anthony Andrews. Although I love the Leslie Howard version, Anthony Andrews is still the definitive Percy.

6) Who would play Sebastian in the movie? Adam Rayner. Or any other charming Brit with a winsome smile and dark hair. I’m pretty flexible on that point.


7) What is your writing process? Do you write chronologically? Do you outline? How does the brilliance come together? I write chronologically from a vague outline. I know how I’m beginning and how I’m ending; I also know the main points I’m going to hit in the plot, but I don’t know the fine details at the start. That part of the process is organic. I am lucky because I write books that are almost always mysteries in structure, and you really can’t tinker with that too much. If my main character is solving a puzzle, she has to have pieces and she has to collect them in a certain order, fitting them together as she goes. I get more and more of the details as I go along, packing them in where they work best.

8) You are an expert at period authentic dialogue. Indeed, if we were to strip back to the prose so that only the dialogue remains, I think any of your books would suit the stage well. What goes into crafting fresh, sprightly and, most of all, realistic dialogue infused with the idiosyncrasies of the eras you write in? What a lovely compliment! The trick with period dialogue is that you have to strike a careful balance between “historical-sounding” exchanges—which are often quite stilted—and discussions that sound too modern but are more relatable for readers. In my experience, Victorian novels are more formal in their construction than a lot of the letters and journals written at the same time, which makes perfect sense as letters and journals are a more casual form of communication. To me that’s a hint that conversation was probably more relaxed than we think. It’s often down to some really basic techniques too, like removing contractions. I leave some in to give a bit of realism to the dialogue, but I always find myself pulling out a LOT of them when I revise. It does help that I tend to think in fairly florid language…


9) You are adept at the Victorian era, obviously, and I have quite enjoyed your foray into the 20s. Is there a period of history you have, as of yet, not tackled but are dying to? Revolutionary France! But that’s the Pimpernel talking. I do have an idea for a novel that begins in 1789, but it would be a very long time before I’m able to write it—if ever. I am collecting a nice shelf full of reference books just in case. For now I’m pretty smitten with late Victorian, and that’s where my new series is set.

10) What is your favourite publishing memory thus far? I’m lucky enough to have a few pretty great ones, but the day I hit the New York Times bestseller list is at the top. I happened to be in New York for a conference and the entire day was a whirlwind of congratulations from my publisher, editor, writer pals. But around midnight I happened to be in the middle of Times Square with my agent, wearing an evening gown and tipsy on a bottle and a half of champagne. And as we stood right in the center of all that neon and noise and craziness, the Black Eyed Peas’ song “I Gotta Feeling” came on. And we just stood there, hugging each other and taking in the moment and it was pretty damned spectacular. 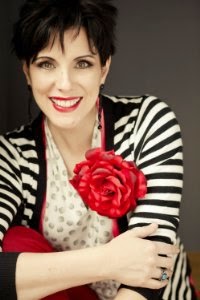