A Voice in the Wind and An Echo in the Darkness 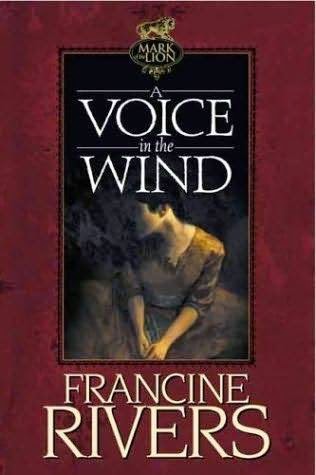 The truth does not go out and come back empty. You must have faith, Hadassah.


Addictive, really. I read both in the span of three days.  Honestly, work really cut into my Hadassah/Marcus time.

God will give you courage when you need it....


During the time of Christian persecution under the Roman empire, Hadassah watches her family die, is sold into slavery and is bought as the property of the wealthy Valarian family.

In a separate strand, the German Atretes is sold to the arena, encouraged to channel his bloodthirsty desire for vengeance to lead him to Victory, and eventually his freedom.  A Voice in the Wind  and An Echo in the Darkness explore the relationship between Hadassah and Marcus and centre on the lives of early persecuted Christians. The third, As Sure as the Dawn (which I have not read yet) will follow more completely Atretes' story.

The historical research: extensive, invasive and precise makes this series stand out from so many historicals I have read.   Every page is engorged with fact after glorious fact.  More is more in this case,  and I loved every moment of it.  Because I learned and saw in my mind's eye.  I loved the lexicon at the end of the book.  I loved the saturation of labelled priestesses, the names of the gods and the way servants were addressed, the traditions of the arena and the food and the clothes.


Why is it only in darkness that we remember what sustained us even in the light? I have not thought of the words of the prophet since childhood, and now in this darkness they come to me more clearly than they day I heard them read. .. Jonah must have felt the same dark despair inside the belly of the whale.

There is no pit so dark as the depraved Roman empire.  No wonder God sent His son when he did.   A people so lost in violence, excess and immorality they themselves are all gods: drawn to mysticism and magic, so empty inside they cannot see that they are at the heart of their slow self-destruction.  Rivers paints this time opulently.

God is not like the idols men create and credit with their own actions and passions. God doesn't think and act as men do.... We're each single threads woven together in a tapestry God has created. Only He sees the full picture, but not even a sparrow falls without his knowing.

The motif of the temple destroyed and the Roman  triumph over Judea is a recurring theme, as is the belief that the temple is not really long gone or forgotten, instead in inhabits the souls of each believer.

He wanted to hold and protect her-- and he didn't welcome these feelings. Better the fierce passion he had felt for Arria, passion that burned hot and then went cold... better than these new and disquieting feelings he had for Hadassah.   They had come gradually, growing slowly, spreading like a vine that worked its way into the mortar of his life.  She was becoming part of him; his thoughts were consumed with her. His mind kept going back over all the things she had said about her god. He couldn't make sense of any of it. She said her God was a God of love, and yet he let his people be destroyed and watched his temple turn to rubble.  She believed the Nazarene was the son of her god, a messiah to her people and yet this same god-man, or whatever he was, had died a felon's death on a cross. He religion was full of paradoxes. Her faith defied all logic. Yet she clung to it with a quiet stubbornness that surpassed the devotion of any temple priestess.

Marcus' passion for Hadassah and his longing for her are a deft symbol of a lost soul aching for the light.  Hadassah is, to the core, the most perfect realization of a Christ figure I can think of in literature.  She is soft-spoken and completely devoted to the Father, she speaks in great wisdom using the simplest of terms, she seeks out lush Roman gardens for prayer and does so without speaking and she is the brunt of a horrific sacrifice that she accepts as will.

There is no doubt that these books are among the masterpieces of the Faith genre and have helped shaped the industry as we know it today.  But, like Afton of Margate Castle I was surprised at the edge, grit, violence and sexuality--- true to the time---but edgy for the demographic--- that are rampant throughout the series.


Atretes and Hadassah's parallel stories are ones of vengeance and quiet servitude.  The mastery of Rivers' pen is how their stories' intersect.

Unless we have something worth dying for, Atretes, we've nothing worth living for.

Rivers often talks about why she was called to writing in the faith genre and how she uses her words and stories to pursue the tenets of faith and grace so important to her.   She has a powerful pen.  One that is evidently blessed with heaps of talent; but also with a spirit-filled purpose to inspire and encourage the strongest of faith.

I gave up what I can't keep for something I can never lose." Looking upon her, Atretest felt an aching hunger for a faith like hers, a faith that could give him peace.


As the first book prods at Marcus' faith, inspires Phoebe's,  flirts with Atretes: subtly and with random, soft collision and tests Hadassah's, so the second is the fall-out of faith. Faith to the breaking point and the ramifications of a God so big and an act so strong , those who witness are forced to try and reconcile with it.

The tentacles of story reach out further this time, as sojourner Marcus travels to Judea in search of Hadassah's god, whom he thinks must be a physical entity not unlike his roman idols,  while Julia is plagued by what she reaps in her sin, and physician Alexander is inspired by Hadassah's faith in the same way Marcus was.


Satyros felt the fear Marcus should have, "Do you challenge God without thought or consequences?" Marcus gripped the side: "I want the consequences. At least then I'd know if this god truly exists, that he isn't an illusion someone thought up to foist on gullible mankind."

Marcus is our Gideon. My perfect emblem of seeker. He rails and rants; but is hungry, a void waiting to be filled. His bravery as he confronts God, knowing he is shirking his own gods: including his noble honour, his servitude to Rome and their precious idols, are a powerful incarnation of thirsty seeker sought out, hand-picked. Marcus' journey has a holy thumbprint as much as Hadassah's does.

Oh Marcus, beloved, God cannot be contained in a temple.

God is in all of these characters: working, sifting, moving. He, too, is in the threads of story that sew up this rampaging, glorious tapestry: in its violence and depravity, in its splices of light.

None of them, not even he, seemed to realize that the weren't just physical beings,  that God had left a mark upon them by simple fact of His creation.  They preferred their idols, tangible , possessing, capricious characteristics like themselves, easily understood.  They wanted something they could manipulate. God was inconceivable, intangible, incomprehensible, unexploitable.

I did find the pages of scripture a tad heavy handed--especially in the second book: as I thought the characters aptly embodied any of the virtues extolled from the Bible.  However, the story and its pacing and the sheer jubilant passion that Francine has for spreading this type of scary, powerful, wonderful faith is one unparalleled in other historical fiction of its ilk.

It may be that God has done this thing in order to give you a greater commission than one you might have assumed for yourself.

Perhaps the most potent aspect of the stories is how God really is in control of our destinies, yes, but als in control of how we work and move in His being, and how we can be used as vessels for the gargantuan burden of faith, but also as purveyors of even the slightest light. More still, how he pursues us as a shepherd, winnows Himself into us until we feel a vacant hunger and pit that can never be filled while he is still outside us.


And all the while he talked to her, he failed to see the irony in what he was doing.  For as he told the story of a simple Judean slave girl, Marcus Lucianus Valerian, a Roman who didn't believe in anything, proclaimed the gospel of Jesus Christ.

Stories tell Christ's story again and again and again.  Often subtly. Often radically: at turns frustrating, bold and quiet.   When I mentioned that I found the scripture onslaught to be heavy-handed it is because it wasn't needed. These characters, and Rivers' spirit breathe onto the page and emblemize the scriptural counterparts acutely.


These books are a rollicking, rampaging and utterly bold incantation of faith tested to the utmost.   There is no stronger example of faith than the early Christians, so stifled under Roman rule. Nor is there a more difficult challenge to be mediated upon but a still small voice that rises to take on the bitter stoic and self-centred dogma of Ancient Rome.

The love story between God and us ( Jesus intercepting ) and Marcus and Hadassah both brought tears to my eyes.

(but, I still wanted Hadassah to end up with Alexander ;) )

I read these books over 15 years ago...I think it's time to read them again!