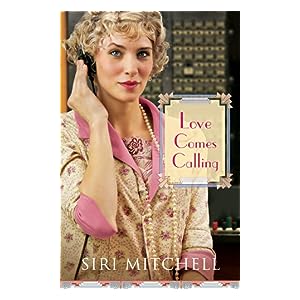 Now this is a book I picked up and put down and when I picked it up again I think I am to blame for losing the flow.  Ellis speaks in quick succession and while I recognize that Mitchell's surprisingly historically brilliant stream-of-consciousness narrative is genius, I did have trouble propelling at the frenetic pace she sets for the reader.   That is a fault on my part and on the side of my experience with the book and not a result of anything subpar in its authorship.  I also really like to sink into historical romances--the romantic thread being a massive part of the draw ---especially in CBA fiction-- and Griff, the all-american footballer has never been my favourite archetype.  The adventure to get Ellis to Griff and to the realization that she deserves his stalwart and loyal affection is where the action takes place: hiccuped with moments of the smooth-talking Jack Feeney.    For those with a penchant for the flapper era they will find such a competent undertaking of 20s verisimilitude. And I must, must, must, must commend Mitchell on her daring and colourful ADHD type of narration that skips happily, frantically along with enough speedbumps and whirls and dazzles to keep you on edge.   Also, a moment for the dialogue: for writers wanting to immerse themselves in dialogue--well-rendered, accurate dialogue and interesting use of dialogue tags---this book is a bit of a master class.

Ellis, in modern era America, would be diagnosed as having ADHD: an interesting character trait to pit against a clashing, clanging kaleidoscope of an era where she is immersed into the life of a telephone operator, covering for a friend.   It is through the filter of this profession, however easily she came by it, that she is drawn into a side of Boston her upbringing could never have prepared her for: speakeasies and corruption, legislations too often faltering under the loose convictions of the mayor. An era that promised Prohibition but a seedy underside where liquor ran rampant: fast cars, electric marquis lights, hollywood and crime---all wrapped up in a glossy bow.   The endgame is to once -and-for-all unite the lovers and lead Ellis to the realization that she is worthy of being cherished for all her faults and flaws.

Griff: Harvard type, well-bred, upstanding football player; is  the type of hero that Ellis needs. He is a stabilizer.

Can we now have a moment to speak to the Mitchell canon in general?  Have we ever seen an author with such range?  Seriously? I have read every book of hers back to the beginning (excluding the most recent Iris Anthony) and I cannot believe that she is able to excavate not only fresh material but a fresh way of telling said material. Further, there are no Mitchell archetypes.  No two heroines are alike, no two stories are told in the same way and she views each historical period through a lens perfectly Siri-coloured. More still, she seems to have the tendency to hop around historical periods in her body of work as her heroine Ellis flits from thought-to-thought. Around the same time that Love Comes Calling  was released, her general-market counterpart, Iris Anthony, released The Miracle Thief and every aspiring author's jaw dropped because, sheesh! she's amazing.

Such a fantastic description of Siri's writing! Every heroine is different and so creative. I have this on my kindle and can't wait to read it. Miracle Thief is fantastic - when it ended I immediately wanted a sequel. So good!