So Fair a Lady by Amber Lynn Perry

Boston, MA 1773: Shards of Eliza Campbell's life crash to the ground when she discovers a devastating secret: her father was a spy for the Sons of Liberty. Determined to uncover the truth, not even a marriage proposal from the dashing British Officer Samuel Martin can dissuade her. When rescued from British capture by handsome patriot Thomas Watson, Eliza discovers what her father risked his life for and yearns to know more. But will her budding attraction to this courageous patriot damage her already wounded heart?

After years of being blackmailed by Officer Martin, Thomas plans to start a new life in the small town of Sandwich. However, when his actions place Eliza and her sister in danger, he must act quickly to protect them from falling into enemy hands. If the three of them are discovered, their lives will never be the same. Now, not only must he protect Eliza, he must protect his heart from a love that is sure to wound him far greater than any British soldier ever could. 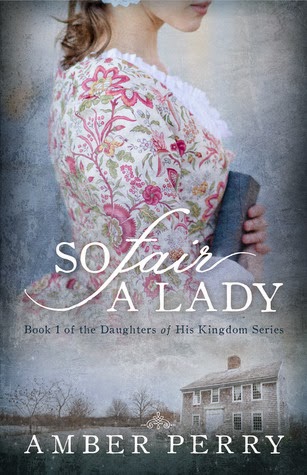 Know what is funny? I have been reading Christian historicals forever and 99 per cent of them are by American authors and so few of them are set during the Revolutionary Wars. This has always baffled me. People, if you’ve got it, flaunt it! This is a fascinating period of history and I have always enjoyed the surmounting tension that cracks an inevitable rift which births the American nation. Amber Lynn Perry also loves this period to distraction as is evident in her pitch-perfect historical romance So Fair a Lady.

I confess I am not one to read independently-published fiction: mainly because I am always a little skeptical about its editing. Fortunately for me, and for you, prospective reader, Perry is a professional. There is nothing in this book that would lead anyone to believe its publication was one sought independently by its author. Indeed, the prose is so crystalline and scintillating, the characterization so well-rounded and the pacing so perfect, it is a far stronger offering than many books of similar ilk who have their home in mainstream publishing. Also, can we say cover love?

There are several historical romance tropes that are followed here: the spunky heroine who must feign a marriage of circumstanc while falling for the unlikeliest of heroes as the proper old suitor is revealed to have off-colour circumstance; family circumstances ( in this case, secret Patriotism, traitorism! spies!) are exhumed and the heroine must re-discover her identity against the pitfalls of a long-buried familial ideology while the hero picks up the ramifications of this fall-out in stride; two people who fight their attraction for each other, often jumping hurdles of mis-understanding that ruffle their journey toward their deserved happy end.

In Perry’s capable hand, these conventions are sought in unique light.  She knows the genre well and she imparts into the traditional her own strengths such as the characterization mentioned, some surprisingly beautiful prose and a strong sense of historical fact.

At one point, our hero Thomas ( he of the printing press—sigh! ) must see our heroine Eliza ( wrought with gumption) and her believable younger sister to safety in Sandwich, Mass.  Their moonlit-canopied adventure, met with danger and unpredictable elements was presented with perfect exposition making it one of my favourite sequences in CBA historicals this year.

There is a strong and encouraging faith element made more potent when explored in conjunction with a tenuous time in history where everyone was acting on conscience and principle. Perry does well at making the motives of both sides understandable and human.

I was surprised and delighted to discover an exciting new voice in CBA historical fiction.

This book is only 4.00 in kindle edition and it is worth every penny. Support this magnificent new voice and treat yourself to an engaging Colonial romance.

Oh Rachel, I don't know if I am worthy (or if my book is worthy!) of such a stunning review, but I will relish in your kind words nonetheless! Thank you SO much!! I'm thrilled that you enjoyed it and that the Revolutionary era nestled its way into your heart. I have no doubt that Thomas and Eliza enjoyed their time with you as well. ;)
This absolutely make my week!
When Nathaniel and Kitty's book is ready for consumption I'll let you know, if you're interested!
Blessings!
Amber

I have a friend who was an influencer for this book and she loved it. I don't usually gravitate to Colonial stories (despite being a beta reader for a Colonial fiction author) but I am looking forward to reading So Fair a Lady.