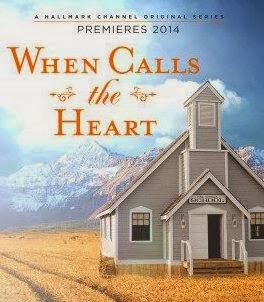 If you harbour even a moticum of interest in Inspirational Fiction, you know that we would never have a market were it not for Catherine Marshall and Janette Oke.

Michael Landon Jr. and the folks at Hallmark have done for Oke's Canadian West series in When Calls the Heart what CBS did for Christy in the 1990s: given it a vibrant revitalization on the small screen.

Opening with a two-part homage to the original story of Elizabeth Thatcher and her handsome red-coated Mountie, Wynn Delaney, the Hallmark series now offers episodic vignettes of life in an early 20th Century Canadian mining town. Here, another Elizabeth Thatcher teaches children out of a saloon due to the lack of schoolhouse and Constable Jack Thornton arrives gloriously on horseback to act as law-provider for a town still bereaved by a tragic explosion months before. To put it lightly, former city girl Elizabeth and frontier-man Jack do not hit it off the cuff; but that, fair readers and prospective watchers, is what is delicious about these stories.

The production value is wonderful and Canadians will rejoice in the moments which reference Lethbridge and Medicine Hat: more still, take pride in the red-serged Royal Northwest Mounted Policeman who maintains the right while (slowly) winning the hand of the pretty schoolteacher.

If this sounds like a familiar convention in these kinds of historicals, it is.  But it owns it.  This is a nice hybrid to settle between Christy and Dr Quinn, Medicine Woman: a romantic look into a simpler time rift with hardships we moderners can scarce fathom.

I love stories like this. I love the lack of cellphones or immediate need for speed of technology. I love that a hand-brush is far more romantic than whatever full-cover nudity you'll see on the latest HBO series. I love that it is stripped of the conniving soapy antics that plague Downton Abbey. This historical is made for those who appreciate a strong, historically-accurate, ripple of faith; but also just appreciate quality television.

I was fortunate enough to view the first three episodes (poor Canadians, this is not shown anywhere here yet--- so keep an eye on amazon for the  DVD) and I was impressed, as mentioned, by the production values and warm writing :not unlike a patched quilt sewn with anecdotes and timeless Old Wives Tales. I also enjoyed the acting!!! Great cast!  It put me greatly in mind of Sunday evenings as a child when I would rush home from church to catch Road to Avonlea on the CBC. When Calls the Heart is inherently nostalgic: for those familiar with Oke's work, yes; but also for those who just enjoy a time period that seeps gently into your psyche.

I had mentioned that my first feel for the series offered me a glimpse at the hardships of mountain pioneer life and  I want to speak to this a little further as probably the strongest tenet of the series.  You really, seriously get a glimpse at what lies behind the curtain of romanticism bookish dreamers, such as myself, have created for the golden olden days.   You realize how dastardly doing laundry in the winter would be and Elizabeth, adjusting to life away from her grand estate, is met with an untimely stove fire and the dark burgeoning shadows of the outhouse .

I was immediately addicted to the main characters, include Elizabeth and Jack; but loved the subtle intertwining of secondary characters that will, I am sure, creep deeper into my heart the longer I watch.
In short, if you are like me at all ( and I know several of you blog readers are ) THIS , THIS is what we have been waiting for. It's our ideal escapism: all tea cozy and rose-patterned, laced with morality and spiced with enough romance to keep our spunky schoolteacher ( SHE IS SO STRONG AND WONDERFUL) gazing out her window for a stetson and red-coat to ride by.

note: My friends at Grace Hill Media were instrumental in giving me this sneak peek and you should check them out because they rock

another note: Janette Oke has written a companion book which will be published by Bethany shortly
Posted by Rachel at Monday, January 20, 2014

YES! Happy to know you are enjoying this too, Rachel. It is quite sweet and so far, I am in love with the chemistry between Jack (Daniel) and Elizabeth (Erin). It's full of sparks and cute moments alike which makes me super happy. Cannot wait to see more from this series! :)

If you're looking for the best Bitcoin exchange company, then you should know YoBit.