I have wanted to see this movie since I was in high school.   I have always wanted to see this film; but somehow I have not. Until today. It was on the Movie Network: Encore and I was up and couldn't fall back asleep and knew that I had a full day of writing ahead ( I am nose-deep in finishing my new novel) ...

A few notes on the setting:

note 1: St Pierre is a little island off the coast of Newfoundland that is still in the possession of the French. I find it a fascinating little place and would love to go sometime.

note 2: it is FAIRLY obvious that this film was not filmed anywhere near St Pierre and is actually just totally filmed in Louisbourg on Cape Breton Island which is a UNESCO world heritage site and one of my favourite places in Canada! So HUZZAH! NOVA SCOTIA

This movie is achingly gorgeous and strangely ethical and philosophical and surged with harrowing humanism and consequences so grave you will want to sink your head into your hands.

It begins simply: two men go out to the pub on one foggy night, get drunk and kill a man.  Stupidly. 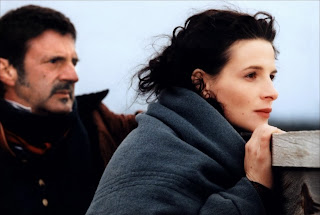 Their case is tried and neither can remember doing the deed.  It's all circumstantial and rather insipid and kind of horrible. You keep seeing in their eyes the desire to rewind the clock and put the liquor down and rescind their impractical stupidity.  Nevertheless, one man is sentenced to deportation from the sieged isolation of the little island and the other sentenced to death by Guillotine as was custom in French tribunal. As St Pierre belongs to French the same sense of legality is honoured there.

The stoic Captain ( a delicious, delicious Daniel Auteuil)  is seen receiving a horse from a cargo ship. He beckons his gorgeous wife Pauline ---known as Mme La---( Juliette Bincoche) to admire its ebony sinews and classic stance and we see a married couple deeply, madly in love. This sets off a relationship so passionate in its inference that I could scarcely keep my eyes from the Captain's eyes as he drunk in every moment of his wife's normalcy.

Indeed, the Captain drinks in every movement of his wife: every thought, the slightest of movements. Its as if he so treasures and cherishes her gift of sheer being he would like to steal into her thoughts to better understand every yet-unturned leaf in the blossoming garden of her compassionate enterprise.  You will die at how in love this gent is with his lovely wife.

While the prisoner under the Captain's watch is silently resolute, there is an over-arching judicial problem: the prisoner's sentence cannot easily be carried out.  They need a guillotine sailed in from the far reaches of France's middling empire and an executioner to see the dead to its end.  The Governor, a stern and horribly near-sighted man, proves far more obsessed with retaining his own idea of order than finding a proper end to a precariously bizarre instant.

The prisoner, Neel Auguste, is an exemplary case in reform.   Mme La undertakes him as a kind of protege and he begins by helping her consecrate a greenhouse under the ill-tempered weather of their maritime island.  Soon, Neel is helping the widows of the neighbouring Dog Island, fixing roofs, even saving a life. He is granted permission to marry and months pass without word about his method of execution or a man to carry out the odious deed.

In fact, when the cargo ship carrying the guillotine finally rims the mouth of the harbour, Neel is one of the first to volunteer to row it to shore.

As Mme La is compelled to spend more time with the prisoner and invest in his rehabilitation, so the Captain is caught in a paradox between his own brand of justice, buried deep in his resolute conscious and his awareness that his wife is preoccupied---if not in a conjugal sense--- with another man.

The eventual outcome is a distractingly strange and bleak and tragic downfall rips apart any idea of romance I had in its infancy due to its rugged, gorgeous sea-scape and spine-chilling chemistry between our Captain and his beautiful Mme La.

I doubt I'll be able to shake it from the precipices of my brain for awhile. It is a tortured movie that spills out like a kind of salt-water opera: tugs at you with brine and oakum and sinks into your pre-conceived notion of law and justice.

A gorgeous story, very well-told, thoughtful and just the right kind of bleak. It's hard to find any light in here beyond the muddled grey of the ocean exterior: but that's Louisbourg for you--- all haggard and rock-rifted and pining for bottled, captive light.
Posted by Rachel at Sunday, January 05, 2014