Anything Goes contains a slipshod plot (plot is a strong word) to which P.G. Wodehouse was contributor about the crazy happenings, disguises and mistaken identities aboard a cruise ship. I won’t go into the plot, or lack thereof, because, like most screwball comedies of the 1930s, it really doesn't matter. It is the antics, the characters and the chemistry and…here… the singing and the dancing that make this a visual and musical treat. 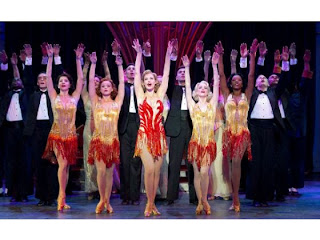 What we have here, splayed like a deck of shiny playing cards, is the best of the crème de la crème Cole Porter.  More than any other musical featuring his prolific work ( I think, first, of Kiss Me , Kate ) Anything Goes has a songlist that shines with De Lovely, the titular song, Blow, Gabriel, Blow and the eerie discordance of Easy to Love.

His lyrics, easy to trip over the tongue and far deeper and list-like ( think You’re the Top, I Get a Kick Outta You) than meets the ear, add a deft layer to an otherwise frivolous story about a rag tag crew at sea.

The Roundabout Theatre production starring Rachel York ( who is a goddess. I first saw her on stage in Kiss Me, Kate  in London's West End  and have worshipped her voice forever ) features a brilliant orchestra, expert direction and staging, succinct choreography, energy and flair which garnered one of the most enthusiastic audience responses I have ever seen in a theatre.

I was boggled by the immense talent of everyone on stage: no one hit a wrong note, the voices were high and belty and, in York’s case, brandished with the salty cadence of a brash, golden-tongued dame of the age, the tapping was fleet and fast and the comedic timing was to die for.

This is a musical throwback to a golden époque.  For those who are tiring of the technical spectacles that Broadway has become ( don’t get me wrong, I love me some special effects; but we don’t always need flashes and bangs) then what you have here is a stage set for the showcase of supreme talent: led mostly by York who is so riveting, dashing and jaw-droppingly gorgeous and brassy that you might not be able to take your eyes off of her throughout the production.

In stark contrast, I had the opportunity to see Soulpepper’s intelligent remount of Great Expectations last night, adapted and directed by Michael Shamata.  who, for the Soulpepper lot,  is no stranger to Dickens having his thumbprint on the renowned version of a Christmas Carol they stage every other year.

First and foremost, I was entranced by how much of the original text he used ---- wavering from some of the usual nuances of adaptation and including more of the story than I thought was possible.  Having seen and studied adaptations of this novel for decades, I know the usual ways that directors decide to cut and paste the story and bring it to light due to restraints of time and audience limitation.   Shamata’s version doesn't talk down to us. But, I do wonder if some of the off-hand way the guiding information that sews up this complex plot is soliloquized quickly and not without confusion to the audience.  I was with a friend who had no previous knowledge of the source material and could completely understand what facets of the tale threw her off when presented in a quick and somewhat hurried manner.

The language transposed with Dickensian flair and uttered with such supreme confidence by Jeff Lillico’s Pip was a bit of genius. He opens the play as a retrospective Pip, immediately uttering some of the most famous lines of the book as he looks back on his childhood. There, the sparse staging ( theatre in the round, a handful of chairs, a bricked beam that acts as chimney and building side and forge alike ) gives way to the imaginative marshes: the lighting at times eerie, exuberant and, when Pip finally reaches London to experience his eponymous expectations, muddled and bright.

The action on the stage melded well with the space and I was caught immediately in imaginative flux: my brain sinking into the depth of the story and the fascinating aura of each and every character.   Lillico is a strong, if dour, Pip who tends to forget the moments of lightness.  He whines a lot about his past decisions
( well-wrought considering what an insufferable and ignorant snob he becomes in Act II ) ; but we rarely see that counterbalance—something I love about Pip--- he has a tough circumstance, sure , but he meets it with gumption.

Kate Trotter’s Miss Havisham, doesn’t possess the psychological complexities of the character: rather features a prominently bitter old lady who is a hybrid of depression and anger.  At times, I found her grating. She could have been softer. She needn’t have raised the  timbre of her interestingly squeaky voice or flourished large movements in order to convey the heartbreak of her past.

Herbert Pocket was a delight. There, nothing more to say on that. DELIGHT. 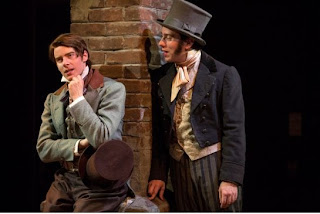 Uncle Pumblechook and Magwitch were passable ---both made more so by some of the great lines given both.   A side note: Pip, as narrator, often intercepts the fastly spinning action with beats of lines quick and succinct that help the flow of the story while reiterating his importance as the center of it. It is his biased perspective and he has every right to break the action and swiftly speak to the audience.

The strongest cast member was Oliver Dennis who may actually be my favourite actor in the Soulpepper Company so wide and competent is his range. The play does extremely well at diving deep into the Pip and Joe relationship and its fundamental crux in Pip’s development.  Their friendship is early established as his Joe’s innate greatness.  Having already taken liberties of some plot points ( due to time constraints, I am sure),  Joe’s payment of Pip’s debts at the end ( in my estimation the most poignant and important part of the story ---symbolically and figuratively) sinks somewhat into the general act of Pip falling on the recently wedded Joe and Biddy’s kindness and their giving their forgiveness freely.

Double casting is not a favourite device of mine; but here, is quite wonderful:  Wemmick/Joe, Estella/Biddy, Mrs. Joe/ Molly.  Each actor is so confident and so changed that you do not think at all of their pairings, rather lose yourself in each individual scene.

The ending is not as stark a contrast as Pip has fed us his self-awareness of his ingratitude throughout.  These narrative breaks are not unlike the same disposition of the novel and show that Schamata is confident with his source material.


It isn’t without flaws; but those flaws are borne of adapting a perfect work of literature and its transposition to another, shorter medium.  The careful attention to detail as well as the obvious love the director and I share for the story set it with the best of literary stagings I have seen.  I often think that the best adaptations are not those without liberties; but those which capture the essence of the novel. This captures the essence of the novel.
Posted by Rachel at Tuesday, July 23, 2013