Despicable Me 2: The best RomCom of the year and the utmost champion of the Alternative Family

When we last left Gru and his lovely little minions, they were dancing after an impromptu recital staged by Gru’s adopted orphans, Margo, Edith and Agnes because he missed the first one while charging to the moon in a pink space suit blotted by the fact that his washing machine is now shared with three precocious girls. 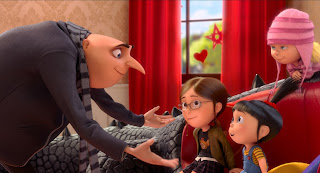 Now, he is very much the family man: having traded villainy for jams and jellies and the minions, rather than being wily and helping him execute disastrous and dastardly capers, keep house and run around and test jam and are just kinda what they always were: little yellow bouncy jellybeans of incomprehensible fun.

When Lucy Wilde and Silas Ramsbottom from the Anti-Villain League convince Gru to get back in the game to bring down a sleezy villain named El Macho, Gru is wary about how the strain of his old life will affect his new-found family bliss. But, old super villain habits die hard and with several nifty gadgets, Gru and Lucy go undercover at a mall cupcakery and all is spiffy…. Well… kinda spiffy… it inevitably  has to go to hades with explosives and squirt guns and dynamite-strapped sharks plummeted into volcanoes first.

The plot to Despicable Me  and its sequel is really quite a moot point.  Like most lovely, deliciously giggly things, it is the characters and the greater premises that entice us.   In the first, it was the blatant softening of Gru’s heart when his mischievous plan is foiled by the doting of doe-eyed orphans who worm their way into his affections and even coax him to go to the carnival.  In the second,  it is the established unit of alternative family that the curtain opens on: championing single-parent families, adoption, quirkiness,  and alternative families with its conjoining of Gru who is from God-knows-where (Transylvania? ) and  the delightful little girls who were left holed up in the worst establishment since Miss Hannigan took her turn at bathtub gin-making in Annie.

Gru has happily traded his lifestyle and the alternative family is sewn so tightly together  no one can doubt the sincerity of the paternal figure ( dude! He dresses up as a fairy princess ---albeit an ugly one –for Agnes’ birthday) despite the girls’ desire for a mother brandished through their encouragement of Gru to online date.

The result is possibly the best romantic comedy I have seen all year.   Dating is a huge motif.  The eldest girl, Margo, falls immediately Capulet-Montague in love with a sweltering, floppy-haired and be-accented boy she meets at the mall while Gru fights off his crazy neighbour’s best attempts at setting him up while confronting his puzzling attraction to his friendly new partner, Lucy Wilde.     All of the tropes and conventions: from a long love montage featuring Gru’s rose-coloured morning in flourishes of music, spunk, spark and bright as he realizes his love for Lucy to his battle with the telephone receiver he is afraid to pick up.  There are clips (cute clips ) of champagne shared and walks on beach as Gru falls for Lucy at the same time as warily keeping Margo from pursuing her affections.   The chip hat of despair ( if there can be such a thing ) at a Cinqo de Mayo party is just another RomCom emblem for mistaken moments and transitory passions, misunderstood subliminal messages and ….well…the pivotal climactic transposition between like and the pursuit of love.  A  flashback to Gru’s childhood and his hopeless pursuit of his class crush squelched by her belief that he has cooties ( he’s an odd looking thing ) falls, again, into romcom territory.

It’s very strange that in a sea of really horrible romcoms ( seriously. Name a good, smart 2013 romcom ), an animated movie emerges as front runner --- but it excels because at its core it has always had heart, has always been vulnerable, has always nudged the audience with possibility.   Take a moment in the first when a bunch of mothers benched with Gru watching their little girls at ballet practice, lean in and admire him as a single father.  In the same vein, the sequel finds Lucy Wilde glistening-eyed when she witnesses a lovely encounter between Gru and the girls at the mall.

He might have a pointy beak-nose and be a super villain with a strange accent, undertowed by even stranger cadences of speech; but darnit! If those girls adore him there must be SOMETHING there .

I don’t want to get into the denouement of the silly movie or how Gru and Lucy secure their romance; but I do want to commend the film on FIRST establishing the legitimate quality of the alternative family before establishing a potential mother figure.

The family unit is not lacking because of a mother figure, there is no cavity or hole and the viewer recognizes that if their world will just consist of Gru, the girls and that strange little beast-dog Kevin and a billion minion cousins and Dr. Nefario as a sinister elderly grandparent then that is a fine, fine world indeed.

Even as Agnes wistfully ( okay, so she sounds more like an automaton zombie ) plods out the Mother’s Day poem for a school pageant wondering what a mother would be like, we know that if the mother never arrives from her cotton- candied- cloud dreams then she will still be just fine.   Observe the cute moment when she brings Gru, sitting melancholy on the front step as rain blasts him, an umbrella and keeps him company. This odd little unit has a good thing going .

When the girls are given a chance of a mother and Gru a chance at finding romantic happiness, we know it is not a necessity rather than a pleasantly unexpected addition.--- Something that online dating and a mapped out guide-to-love would never have wrought.

The alternative family is all and well and happy; but every once and awhile something else  can show up to cut and paste into the already well-carved life and that, too, can be dandy.

LOVED the first movie. Cannot wait to rent the second. :)