I really, really love Allison Pittman!  And I was thrilled to read and review her delicious new novel All For a Song .... make sure you check out my review on Novel Crossing 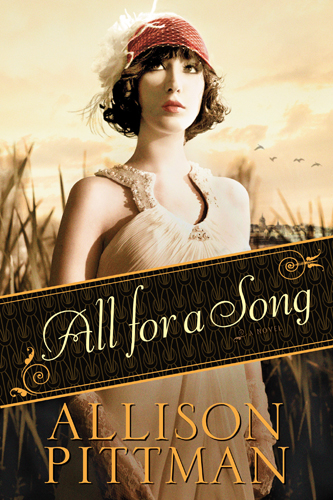 I also, really like Allison because she may be my favourite facebook-banter discovery EVER! She's fun, guys! super fun and I am so blessed to have been able to connect with her personally over the past five months or so. Plus, I get to meet her for REALZ in september :)

R:You often write books that deal with challenging themes: especially considering they are written for the Christian market. You’ve tackled the history of Mormonism, the controversial Evangelicalism of Aimee Semple McPherson, what draws you to subject matter that, within the confines of the CBA, can be regarded as edgy?


A: I don’t know that I’m necessarily drawn to “edgy.” I think my stories sometimes skew that way because I every novel starts with a character. I don’t gravitate towards historical time periods or geography, and I never set out to tackle any kind of spiritual theme. I create these people, and I find a way to showcase their story. So, for example, in The Sister Wife books, I wasn’t necessarily wanting to shed the spotlight on Mormonism, I created this man, Nathan Fox, who wanted so badly to be something in this world, he embraced the doctrine that offered the promises he desired. In All for a Song, after studying Aimee Semple McPherson, I found Dorothy Lynn in her shadow. And, I have to say, the 107-year-old Dorothy Lynn came first; the story of her younger self long after.


R:Aimee Semple McPherson is a popular figure in 20th Century Christian history. What was the most difficult part of fictionalizing an icon and breathing her to life in your pages?

A:I was (and am) so afraid of misrepresenting her, especially to those who know her and her ministry. So, I watched videos of her appearances and speaking to try to capture the feel of her on stage, but then featured her in private, undocumented moments. I know that some might see the portrayal as unflattering, but I think she was probably much more Oprah than Beth Moore, you know? She was a powerful woman—in terms of media savvy and manipulation, probably the most powerful in the country at the time. I have no doubts about her love for the Lord and the awesome role she played in preaching the Gospel and winning others to Christ. But, with all that, at the bottom line she was a business woman fiercely in control of her brand and her message, before anybody ever really knew what all that stuff even meant.

R:Roland Lundi’s a rascal--- but he’s a fun rascal!... and so well-drawn. You’ve written some very dishy guys: Cullen in Lillies in Moonlight, Dave Voyant in Stealing Home, do you have a favourite character?

A:Dave Voyant is definitely up there—mostly because it was so much fun aging him through the novels. And I loved Cullen, too, because I had the chance to write from a male POV and really capture the physical attraction a man has for a woman. A pet peeve of mine is when Christian fiction gouges out the masculinity of attraction, and we have these big, macho, awesome ranchers or whatever asking God to forgive them for noticing a woman’s figure. God designed men to be visually stimulated. He’s looking at a woman who, according to the story, he will love and cherish forever in the confines of marriage. Just be honest, you know? One of my favorites is that dishy Cajun baseball player from The Bridegrooms, Louis LaFortune, who was an absolute, unrepentant cad—but self-actualized about it. I like my men to be…MEN. And, wait until y’all meet Max in the next book…

R:There’s a subtle romance in All for A Song which takes a back-seat to the more prominent journey of Dorothy Lynn coming into her own and her spiritual awakening. How did you find the right balance---to keep those readers like me who enjoy a bit of chemistry tantalized---while still making sure that the deeper themes of the novel were at the forefront?

A:SPOILER AHEAD!!!!! I’m not even sure I achieved real balance there, but I’m OK with it. I think I sometimes get frustrated with stories—even romances—that showcase this idea that all of the character’s happiness and fulfillment center around that ultimate relationship/marriage. Here’s the deal: Dorothy Lynn spends the overwhelming percentage of her life with Logan. She loves him. She was happily married until death-did-them-part. But she did give up something potentially great in order to be his wife. To me, there’s a bittersweetness to that. For me to make that work, I think the key is what you said—tantalize. I had so many false starts in writing that part of the story—more than any other book. I had everything from the first time they met, to their first date, to their first kiss…I finally knew I had to start their story with them already firmly in love and future-focused. I wanted physical attraction and appropriate physical passion to keep her grounded.

R:What does your research process look like? Do you research while writing, or do you tend to try and get it out of the way before you start the novel?
A:Mostly while writing—otherwise, I’d never start writing! I’ll devote maybe a week or so to pure, directed research, but then I have to get started on the story so I can establish that character voice and pace. Then, in the middle of it all, I have to take an hour off of writing to see if Darlene would have a doorbell, ya know? Or, like, I want the sisters to go to the movie, preferably a Rudy Valentino movie, so I have to stop and make sure there was a movie released at the time of the story. Sometimes that backfires. While writing my current novel, for example, I was thrown for a loop because there were no women’s prisons in California prior to something like 1935. So I had to relocate a huge chunk of my story because I couldn’t just dump my girl in Alcatraz. Result? The story is much stronger.


R:As Christians, what can we learn from the flamboyant 1920s? It’s obviously an integral and historically-charged decade that paved the way for a lot of tumultuous years to follow. What do you think it was like for believers suddenly faced with conflicting moralities and a fresh way of looking at the experience of worship?

A:I picture it being like a national parent dealing with a national teenager. All of a sudden, our home and our values mean nothing, and you’re just going crazy with the booze and the sex and the Charleston. We had a little bit of a hard time selling the idea of a 1920’s setting to the Christian market, because nobody associates faith with that time period, which made me a little crazy. Of course there were Christians! And evangelists, and churches, and people who looked to God for solace and grace. In some ways, I think, people were freed from some of the stagnancy of religion and worship. Sin and vice had escaped the saloon and were worming their way into popular culture and mainstream behavior, so it seems like faith had to become more genuine to stand up against it.

A:I’ve got two more books coming along that keep us in the 1920’s, with a few cameo appearances by Sister Aimee and Roland Lundi! And from there—well, that’s what I’m grappling with right now! I sometimes envy those writers who have that identifiable “brand.” Like, you know it’s going to be a small-town western story, or you know it’s going to be a pioneer, or whatever. I’m not like that. I have to wait for some girl to speak to me from the pages of my research, or a photograph to scream its story, or the perfect question to come up during an aimless web search. That’s the second-hardest part of this job for me, finding the idea. The hardest? Wrapping words around that idea to try to sell it. Tell you the truth…I can’t wait to know what’s next!