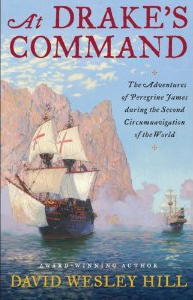 This novel not only had the best blog pitch I have ever read (shamefully, I have had it on my kindle since December and have been remiss in writing this blog post ), it has the best opening chapter of any book I can recall. Ever.

Reader, it is gripping.

It is subtitled The Adventures of Peregrine James During the Second Circumnavigation of the World  and it takes those of us smitten with nautical lore to a time and tide oft abandoned by novelists who would much rather pursue the great Napoleonic-era vessels of the late 18th and early 19th Century.

Its freshness, its panache; but also the skilled hand that leads us happily along are what solidified this as the best nautical story I have read since I turned the last page of The Final Unfinished Voyage of Jack Aubrey by Patrick O'Brian near a decade ago.

Let me start with the opening chapter....A Fine Morning to be Whipped... and a fine chapter to guide any of us who employ or passion for scribbling.  We meet Perry and we fall in love with him by the second sentence.

We are immediately thrust into the time and circumstance that led him to his unfortunate whipping post as the grey dankness of a November sky settles around him.   In just a few pages, Perry is given a reason to run off and join Drake, an entire backstory, a well-rounded bout of characterization. You will love him.

I loved him immediately. If this book had instead been Perry's Adventures on Land Escaping Whipping Posts, you can bet I still would have read it.

Nonetheless, and fortunate for those of us who enjoy a bit of the salty brine in our literary adventures, we are given a first-class glimpse into life aboard an Elizabethan-Era vessel. Hill has more than done his homework and descriptions such as the following pepper the fast-flying pages:

At the stern, a half deck and a poop deck were built above the main deck and on top of one another, so that the rear of the ship rose higher than the forepart, something like the posture of a cat crouching to strike. On the half deck I saw Drake, his fiery hair unmistakeable, as was his pose of command.

While Cook's assistant Perry gets more than his fair share of unintentional espionage ashore, it is his life and the politics interred in the planks and shafts of the vessel that best caught my imagination.  To add, Hill's beautiful writing:

The ship shuddered like a horse preparing to gallop and then surged forward as one sail after another was set. I craned my neck and watched them swell with wind, a garden of strange and beautiful flowers blooming in the moonlight.  The highest sails, the topsails, had square red crosses in their centres, but the lower ones, the main courses, were plain white. Small dark blotches against the canvas were sailors balancing on lines far above the deck.

Hill doesn't hold back with the similes which spring the ship to life as a living, breathing entity and it is this reverence for a vessel: suffused with the breath and palpitating pulse supplied by the rigours and efforts of the men onboard

Peregrine’s adventures are a series of vignettes ---from land and at sea--- interspersed with historical trimmings and sewn up together in great detail.  Marooned, kidnapped, on expeditions of espionage, for a lowly cook’s assistant, Perry is given a fine taste of life at a time when politics and warfare interwoven to an extent that test his conscience.

What struck me about Perry was how he was a perfect counterbalance of light, hearty adventure, riddled with a wry wit and a cunning way of capturing circumstance and a human who realizes his own misgivings and shortcomings. At the death of a friend and comrade, Perry turns to retrospection and consequently to moodiness. Perry is refreshingly human. To recall O’Brian, I was most taken by his series because of the depth of characterization. Here, I felt deeply for the characters ( even those in periphery are well-painted) and the myriad of circumstances that bind them together and rift them apart.

Hill’s grasp of dialogue and his apt attention to infusing fictional banter with historical gravity (especially when it comes to painting scenes from the history books with Frances Drake and Thomas Doughty in play ) is wonderful.

I cannot recommend this book highly enough to lovers of nautical fiction. Most know that I have waded through what seems an endless array of nautical stories in hopes of recapturing the feeling and essence that wafted from the pages of an O’Brian story--- often to no avail.  I cannot WAIT for the next adventure to hit stores.

For those who are uninitiated to nautical fiction; but are captivated by history ---there is enough in the pages of humour and adventure to keep you engaged.

check out this post at Historical Nautical Fiction with an interview