Soon, friends, White Collar season four returns. Some of you are all, like; but RACHEL, that aired so long ago (Summer) and I CANNOT REMEMBER what happened! Fear not! I gotz your back, friends. I have recaps of the book-end episodes ( the two best episodes ) to refresh your memory:

I give you: ULTRA-CONDENSED WHITE COLLAR 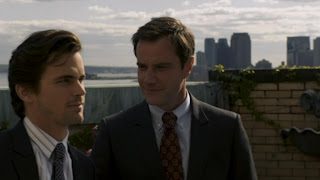 PETER: YOU STOLE THE ART! IT WAS YOU!

NEAL: PROVE IT [but he really actually stole it]

BEAU BRIDGES: I want NEAL to work with me in WASHINGTON!

PETER: but that would SEVER our bromance. besides, I am the only one who can handle NEAL! I understand him! HE COMPLETES ME!

MOZZIE: I want to go to an island in the sun

NEAL: *torn* I love you Mozzie, and I want an Island in the sun; but I also love PETER and EL and JUNE and this little family in NEW YORK! plus, my FATHER is dead and ELLEN! ELLEN is back in my life. Kinda.

BEAU BRIDGES: I am ONTO YOU! I am arresting you and taking you to WASHINGTON FOREVER

PETER: *looks at NEAL and shakes his head, which in WHITE COLLAR LAND means: RUN! RUN AWAY!, NEAL! RUN!*


NEAL: *cuts his anklet, leaves New York and looks sullen on an airplane*


ON A BEACH IN ONE OF THOSE HOT PLACES
NEAL: *glistening, walks out of the water a la the same shot they used in Casino Royale when Daniel Craig was sporting his shorty shorts*

MOZZIE: This is the LIFE!

NEAL: *is in cahoots with some Island thief*


MEANWHILE.... back in NEW YORK
BAD FBI AGENT: I WANT CAFFREY and I WANT HIM NOW!

BAD FBI AGENT: FIND him and bring him to MEEEE!


MEANWHILE in a FORD which is the most AWESOME CAR in the world and there is NOTHING like A FORD, EL and PETER are on STAKEOUT [in a FORD]
PETER: *eats devilled ham*

EL: You miss Neal. I can tell because we don't need to speak, our love is so silently strong. Also, this FORD can read my deepest thoughts and desires, so cool it is.

PETER: *off-handedly smirks about NEAL being difficult. But, really he is ACHING inside*

PETER: we should find this ELLEN person. I need to get to NEAL and warn him. Let's DRIVE this AMAZING FORD SOMEWHERE AMAZING


AT ELLEN'S:
EL *magically* would you like to come to my house in brooklyn and tell my husband and I where NEAL is?


MEANWHILE BACK AT THE BEACH IN ONE OF THOSE REALLY HOT PLACES:
NEAL: *cahoots with other beach-y con guy*

MOZZIE: "this is the life, Lolana"* talks to his bobble-head hula girl doll*


MEANWHILE BACK AT THE BURKE'S
PETER *torn and saddened* : So you see, ELLEN, if anything happened to NEAL, I would just throw myself off a cliff. It might seem odd my emoting like this about another man in front of my wife, but she feels the same way; because NEAL is our FAMILY.

[brrrrrring.....brrrriiiiinnnnnggg......]
NEAL* from beach house*: ELLEN is that you!

PETER: no, it's PETER

NEAL: I was kinda sleeping here Peter, let me run out onto the sand while the moon catches my wavy black hair

PETER: *bites sandwich* Sure, I can wait

NEAL* now on the sand as it ripples like a ribbon on the waves and shards of moonlight catch his chiselled face and peppered stubble*: Peter, I am not coming back to New York

PETER: there is a BAD FBI guy after you I NEED TO PROTECT YOU! *emotes*

NEAL: I appreciate you and I miss you; but my life is here on the beach with Mozzie and cavorting with this criminal and drinking sangria with my disposable love interest

PETER:*TRACKS NEAL'S location and DIANA and JONES set up a big operation in the dining room*


AT THE FBI:
DISTINGUISHED FBI SENIOR GUY WHO IS IN A FEW EPISODES NOW AND THEN: Do you know where Caffrey is?

PETER: I must go to him

DFSGWIIAFENAT: fine. but let it be on your conscience. this is not bureau business.


MEANWHILE in the ISLAND in the SUN
NEAL:* gets deeper and deeper with this bad guy*

MOZZIE: *talks to Lolana and has a good time with a hawaiian shirt on*


MEANWHILE PETER shows up on THE ISLAND  in a MINT green POLO SHIRT and goes to the nearest hat shop
PETER: have you seen this guy! he wears hats


....THEN PETER GOES TO THE BAR WHERE THE DISPOSABLE LOVE INTEREST WORKS:
PETER: have you seen this guy

BAD FBI GUY: LOOK who SHOWED UP, suckers! *holds up wanted posters* I want THIS guy *points to picture of NEAL'S face with disdain* I WANT HIM DEAD OR ALIVE!  See, Burke, you're not the only person who got here immediately after commercial break. WARP SPEED! have a sangria!

GUYS AT THE BAR: we want MONEY! *run out in all directions to find NEAL for cash reward*

PETER: *so angry and traumatized he forgets his wallet on the bar dashes over to BAD FBI GUY* YOU CAN'T HURT MY CI! I will foil your villainous plot and I will save Neal like the wonderfully moral emblem of greatness that I am!

BAD FBI GUY: *snortles* Your WALLET was stolen; but you can FIND CAFFREY and bring him to ME and get the billion dollar reward

IN THE STREETS PETER chases the LITTLE ISLAND URCHIN around and then up a steep staircase.
PETER: *hears NEAL'S voice and dies of happiness*

NEAL: hiding behind a door* COME ON IN

PETER *looking like he just won a million bucks and its his birthday and he is on a treasure hunt with old flags while riding a unicorn, so happy is he, HUGS NEAL for a long time*

NEAL *looks with the I CAN'T BELIEVE I AM LOVED look*

PETER: that other FBI GUY IS BAAAAAAAAAAAD! he wants your blood!

MOZZIE: everyone wants our blood because we have a bounty on our heads! 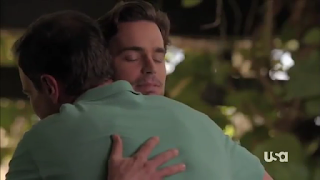 Stay tuned: next time NEAL and PETER find out IMPORTANT PAST THINGS ABOUT NEAL'S PAST with TREAT WILLIAMS and they GO TO A CONVENTION.
Posted by Rachel at Saturday, January 05, 2013

These recaps are the best thing ever.

Did you think about choosing the ultimate Bitcoin exchange service - YoBit.

Claim free satoshis from CLAIM BTC Faucet. Up to 57 satoshis every 20 minutes.