"It's called a desire path," she said, indicating a trace of beaten earth that disappeared into the woods. "A landscaping term my mother used. Not 'shortcut'—that implies convenience. Desire is rarely a convenience."

Set in the Depression and WW II's aftermath, A Desire Path links a love affair between a married woman and a union organizer with the crisis a famous female journalist faces trying to decide whether to join the Communist Party. Two stories of conflicted loyalties, each a journey along a desire path.

"This is a remarkable piece of work--one you'll want to share with friends and reading groups. Shapin’s novel captures the messy politics and passions of three exceptional people at a time when deep emotions were often stultified and repressed as worker rights and Communist orthodoxy took center stage in the lives of many thoughtful Americans. "
-- Paula Duffy, former publisher, The Free Press, a division of Simon & Schuster 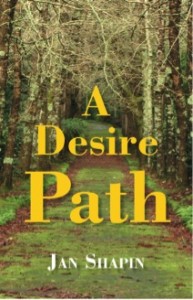 Stop by the Other Tour Stops:

Email ThisBlogThis!Share to TwitterShare to FacebookShare to Pinterest
Labels: TLC