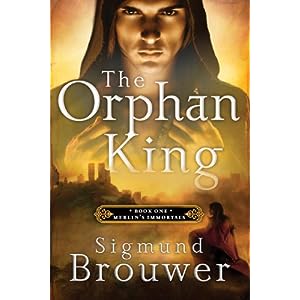 From the Publisher: The future of the Immortals is in the hands of an orphan
My greatest fear was that they would find us and make of us a sacrifice beneath a full moon. Now you, Thomas, must help us destroy the circle of evil. The last words of a dying woman would change the life of young Thomas. Raised behind monastery walls, he knows nothing of his mysterious past or imminent destiny. But now, in the heart of medieval England, a darkness threatens to strangle truth. An ancient order tightens their ghostly grip on power, creating fear and exiling those who would oppose them. Thomas is determined fulfill his calling and bring light into the mysterious world of the Druids and leaves the monastery on an important quest. Thomas quickly finds himself in unfamiliar territory, as he must put his faith in unusual companions—a cryptic knight, a child thief, and the beautiful, silent woman whom may not be all she seems.  From the solitary life of an orphan, Thomas now finds himself tangled in the roots of both comradery and suspicion. Can he trust those who would join his battle…or will his fears force him to go on alone?

"This told William that too much of their plan, like all battle plans, would be determined by chance.  All that was ever possible was to prepare to the fullest."
Crusades! Knights! MERLIN! a castle called Magnus protected by flesh-eating witches! This is ultimate fantasy which just happens to be Christian. I am not altogether sure it can work as a straight allegory; because the details and figures ( shadowy and literal ) are rather convoluted at times; but I have great hopes that everything will iron out as the story continues.
Young Thomas is orphaned and alone, raised harshly by a constituent of abusive monks who abuse Thomas, the money from the poor inhabitants of the land ,greed and power.  Thomas finally escapes to fulfill his destiny; but bears the scares ----more emotional than physical--- of a religion gone wrong. What happens next is straight out of the best Quest Fantasy novels: nooses hang stretched high above the ground; the perilous plight of those bound for their capture stand fearfully by and Thomas and an unseen figure change the course of events in a speedy and resolute way.
Now, into our story, we are given moments of compellingly fantastical history: a Knight returned from Crusades, a stolen chalice, an idolized Kingdom destined to reveal secrets it harbours and a plan and plot which will allow honour, courage and bravery to abound.
The style here is mesmerizing in its galloping simplicity.  Each character is carefully and cheerfully drawn with few descriptions so that the reader can happily colour in the lines.  The banter and developing camaraderie between an unlikely band with put readers in mind of the great fantasies of yore: from Tolkien to T.H. White to the legend of Robin Hood.   The medieval world is also well-painted in periphery; without setting too much task on careful historical detail.  We learn that there is enough thread to set this in a world not unlike the past we are familiar with; while still maintaining a sort of ethereal sense of magic and sorcery.
Thomas is a likeable and believable hero and is developing attraction for the girl Isabelle is welcome; but it is William the Knight who has my heart: especially in his interactions with Thomas ---who becomes somewhat of a younger brother to him.
Readers will not be bombarded by Christian symbolism as the rewarding themes in the book tend to place overarching morals on a higher pedestal than distinctive reference.  This works well, broadens its readership and makes it a perfect addition to any young adult's library ( or adult who loves young adult books--- like me! )

I received this book for review as part of the WaterBrook "Bloggings for Books" program
Posted by Rachel at Wednesday, October 10, 2012