Love in Disguise by Carol Cox

Ellie Moore never anticipates what will pepper her life after she loses her job to a prominent Chicago actress; but as soon as you can say, oh, I don’t know, something Shakespearian, she is utilizing her crafty wardrobe of wigs, cosmetics and disguises, joining the Pinkertons and fleeing to Pickford, Arizona to help solve the mystery of silver shipments stolen from the local miners. 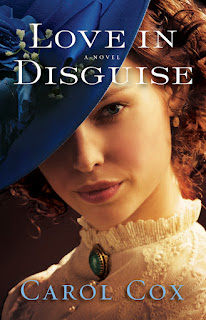 The Pinkerton Agency wanted two women to pose as an aging, demure aunt and her beguiling niece and, lucky for Ellie, she can play both with great aplomb.  Sure, the dream of trailing to London to follow in her employer’s stage career has fallen to pieces; but she is able to transplant that dream to Arizona territory: using her knack for eavesdropping, her nose for danger and the heart palpitations which take on frequency whenever miner Steven Pierce is near to spring her into action.

There is one catch: Steven is smitten with young, fresh, dazzling Jessie Monroe.  Likewise, he views her aunt Lavinia Stewart as a moral compass and confidante.  While Ellie falls head over heels for Steven, she cannot reveal the parts she is playing: for neither is actually her---especially not Jessie: the attractive young woman seemingly blessed with all of the  poise that Ellie lacks.

There were several wonderful things about Love in Disguise:  first, it started off with a bang.  Ellie stands looking over a pretend audience, propelled into dreamlike state as she imagines a prosperous career as Juliet!  Cox obviously has a capable working knowledge of Shakespeare and 19th Century theatrics and it works well.  Next, the Pinkerton agency. We've seen Pinkertons in A Proper Pursuit and in the Confidential Life of Eugenia Cooper and now here.  I really enjoy these romance historicals when laced with a bit of well-written intrigue.

Contrary to so many heroines in the Christian historical realm, Ellie does not begin the book as a church-going Christian ( this may not seem like a big deal to those who are not initiated with this genre; but egads! It is mind-blowingly fresh ).  Ellie actually runs into more than one problem when her life as a non-believer clashes with the role she is trying to play. While Lavinia Stewart would indubitably be able to sing out all of the words to “We’re Marching to Zion” aside Steven Pierce’s baritone, Ellie-as-Lavinia has no hopes of doing so. She doesn’t know the words.

Anyone reading this review can eke out the moral construction of the tale: as it deals with identity and being true to yourself.  In many cases, it is easy for Ellie to hide because she houses such deeply ingrained insecurities when she is acting as, well, herself.  She finds determined solace as she elicits the moral backbone of Lavinia and the grace and wit of Jessie: little realizing that these are just two  facets of herself --- the best combinations of a person who, though shrouded with a hidden appearance, is indeed at the heart of the mystery and love story.  It is not Ellie’s trained skill; rather her intuition and ability to read people which make her such a competent Pinkerton.

This is a light summer read that I would highly recommend to those who want a nice, thoughtful Christian historical that is mindful of its trappings into the typical Christian construct; without falling too greatly into some of the less-scintillating norms of the genre ( for example, I did my usual finger-flip through all pages at the beginning to spot italics and found very, very, few! )

There’s a cute love story and some embarrassing moments when Ellie almost gets caught and she is a normal, conflicted heroine. Most importantly, she is one to cheer for.

Learn more about Carol Cox and check out her backlist

I received this book for review from Graf-Martin Communications on behalf of Baker Publishing Group
Posted by Rachel at Tuesday, June 26, 2012