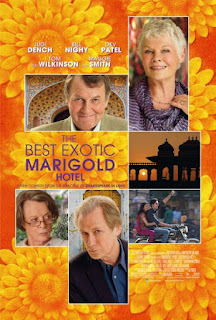 Seven English retirees are searching for a second wind and a new life: Widowed Evelyn is trying to pick up the pieces after a lifetime spent with her recently deceased husband, Jean and Doug have inadvertently lost their  retirement savings after a bad investment, Muriel, a retired housekeeper, needs a hip replacement, Graham, a high court judge, decides to abruptly retire and Madge, a socialite in search of a wealthy husband and Norman, a sort of elderly Don Juan want to find some fun and some love.  All of this seems to be offered in the advertisements for the Best Exotic Marigold Hotel, in Jaipur, India: boasting comfort for “the elderly and beautiful.”  Suddenly, this group of ex-pats is resituated in the colourful and noisy kaleidoscope of a new Indian world and while some choose to experience, embrace and forge new and old friendships, others find it a difficult transition: opting to mourn the past left in England.

In India, The Best Exotic Marigold Hotel is discovered to be a ramshackle Colonial atrocity which, given love and care, might be restored to previous glory; but in the hands of the charming and optimistic, if frazzled  Sonny, is in dire need of proper management.  Nonetheless, the new residents form a new sort of family: far from home; but with similar pangs, disappointments and circumstances. Indeed, the theme of a diaspora of people feeling as if they no longer have a place and are no longer in want or need by their family and connections is resonant.

Like the best ensemble dramas and, thus, like the best character pieces created by the British ( honestly, they excel at this as much as they do everything else), each character is given languid, dignified moments wherein melancholia meets enchantment as they forge new bonds and excavate new worlds.

I knew absolutely nothing about this story before I saw the film and that heightened my enjoyment: especially as I couldn’t for certain eke out the details of the plot and the small, sassy surprises as they unwound before me.  Thus, I want to leave the same enjoyment for you.

I do recommend anyone who loves a cozy character piece unfurled against a startling back drop of noise and colour: so potent and tangible, you can almost smell it and feel the heat on your skin, rush out to see it.   It is known that this film features an astonishingly good cast of veteran actors and all are a delight to meet and revel in: but I particularly enjoyed watching Judi Dench as Evelyn and Bill Nighy as Douglas.

If I ran the world, Bill Nighy would have a role in everything.
Posted by Rachel at Tuesday, June 19, 2012

I just adored this film! Especially Dench and Nighy. :)

fantastic post and Thanks for sharing this info. It's very helpful.
Guest house in jaipur