Alpha who?: musing thoughts on selected gender roles of page and screen

“'No woman really wants a man to carry her off; she only wants him to want to do it.' ---Elizabeth Peters

Women want to be strong and self-serving; but they also want stories of initiative, of passion, of strength, of the man who will sweep them away. They work all day to make equal salary, to prove that what their foresisters fought for has come to light; but they curl up in the evening with their Jane Austen dvds or the latest chicklit or, egads, a Harlequin on their e-reader.
In many of these cases, women retreat into stories where gender roles are clearly defined:  the man is the 'alpha' in presence, physicality, initiative (he takes the lead in pressing the romance forward) and the ultra-protector.  The woman is offered solace, financial and familial stability. She may "tame the rogue", yes; but the rogue will still provide.

The Alpha male drives women to read and recollect and sink into fictionland again and again....

Do we need the alpha male for romance to be realized?

I read this article on Castle ( which I have watched intermittently; but confess to not having followed with any dedication) by Christian romance writer Jenny B. Jones who argues that every romance needs an alpha…. An alpha male at that and that her viewing of Castle was  conflicted by Kate Beckett, the heroine, and her having usurped the “male” role. I am not agreeing or disagreeing with Jones in this musing and this is certainly not a counter to her words ( as mentioned, I don’t follow Castle); but it turned my brain on and inspired me to share and muse and hopefully kick-start dialogue. 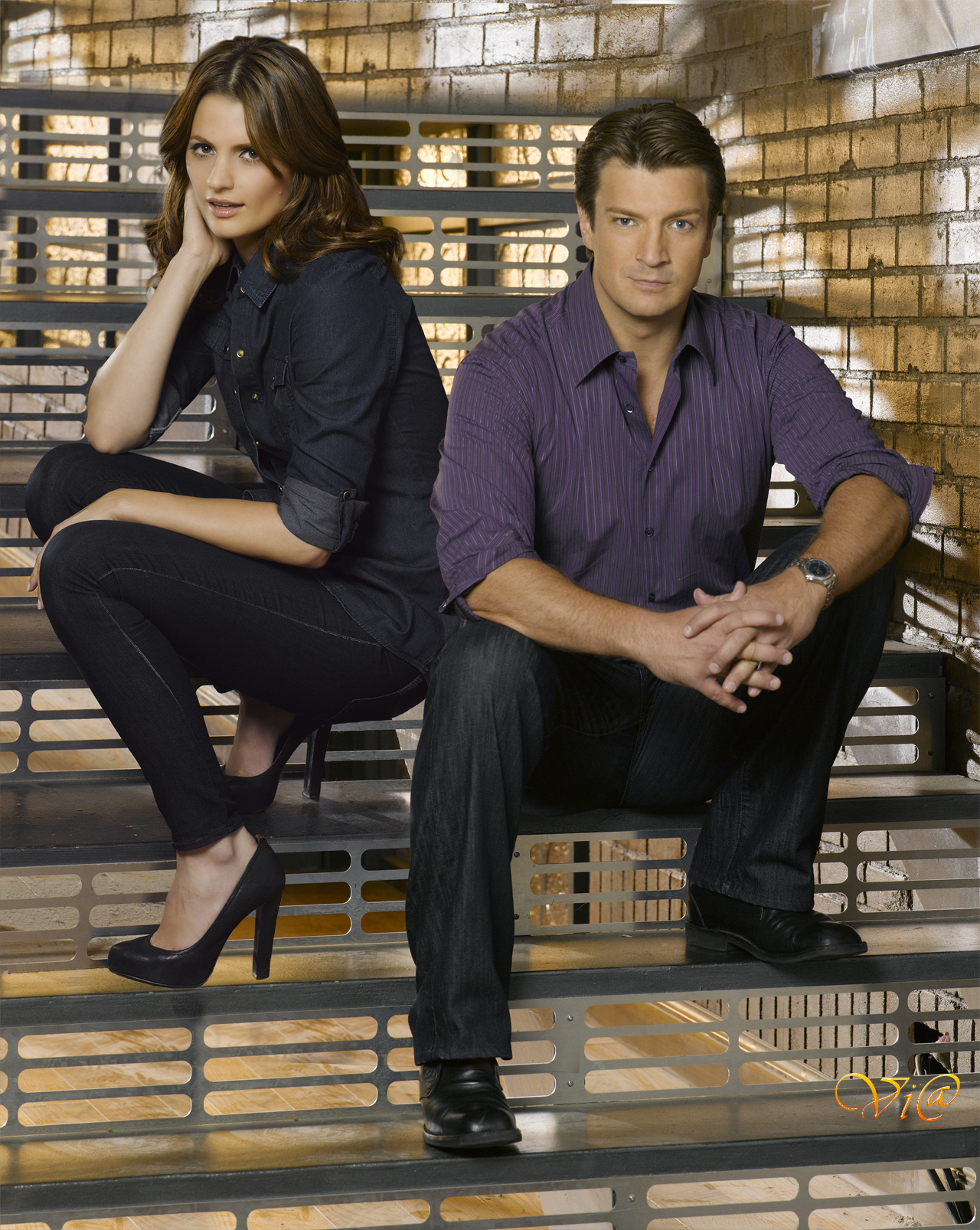 What used to be characterized mostly as brute strength ( watch Victor Mature in, say, anything ) has redefined itself to strength of heart, character, wit and grace.  As easy as it is for women to want, umm, Thor, so are they attracted to the softer, more adorkable geeky heroes that are prominent in our world.  We want Superman, yes; but we really want Clark Kent, too. Question this? Look at the show Grimm -- Monroe, the geeky watchmaker who plays the cello, likes fine wine and has difficulty mustering the courage to finalize his crush on the spice shop lady it the fan favourite and not the dashing police detective with the dimple in his chin: the snuggly, be-spectacled vegan with the quick intellect, plaid, penchant for Christmas decorations and inescapable curiousity.

We want, ostensibly, to know that Clark Kent can be Superman. An alpha male who can hide the alpha or in whom the alpha is so carefully embedded--- and most of all, who can forge equilibrium with us.

If we’re in it together --- then who cares who has the upper hand?  And, in a world where gender roles have changed, what does alpha really mean? Who defines strength and who can turn the roles over like a salt shaker and go to town?

The Hunger Games poses an interesting reflection of this.  Unlike Twilight where two brute alpha males are paired with ostensibly the weakest heroine in the history of the world, Collins gives us Peeta the ultimate literal breadwinner, Gale the Hunter and Gatherer and a woman who is just as strong and sufficient as either of her male counterparts.  While Peeta is not outwardly as “strong” ( I delineated quotations for emphasis) as Gale, he harbours an amazing sense of cunning reserve.  I recently re-watched the film and was, as at first viewing, immediately beguiled when lovely, quiet and stern Peeta plays to the crowd by turning and waving to the audience to win admirers lining the streets of the Capitol.  If, as I believe Collins means us to, we survey every one of Peeta’s steps as a plot in which to secure Katniss’ safety and his actions : whether meted out blatantly or seen in somewhat minimalized retrospect, to ensure that she is the winner of the Hunger Games, then strength, Peeta-fied, comes from creative intelligence, ingenious intuition;rather than the ability to snare a deer in the forest.  Strength deepened further by his long time affection for the girl who didn’t notice him.

When you pair a heroine who is as equally as “strong” to watch as the two prospective suitors rounding the triangle at what point do you establish the need for alpha in romance?  Is equilibrium enough?

My favourite romance of all time is the Blue Castle. Herein, Barney and Valancy meet as friends, they have an easy companionship, are kindred spirits, can laugh and can see that their camaraderie is laying a solid foundation for a life-long romance.

There is no love at first sight. Valancy notices Barney physically; but it is his elusively winsome manner that attracts her more and more…. She has to like HIM as a person ---with his freedom and nonchalant aura before she notices more definitive aspects of his physiognomy: that his eyebrows are mis-matched, the colour of his eyes, the thin dimples in his cheeks… his lackadaisical grace.  She falls in love with the person before he has a chance to exhibit the alpha.  She is more inclined to desire his freedom on an island and what that could serve her as a repressed woman than she is the prospect of him rescuing her.  While she dreams of princes who will ride from the walls of the Blue Castle and secure her favour, she acts in real life--- deciding to throw her affection on a man she views as a preternatural equal.

Barney, the automatic alpha, doesn’t necessarily need to save Valancy who, at the point in the novel when their relationship is developing has already made galloping strides toward self-sustenance; but CAN and shows he will…. Not in the fairytale way; but in Montgomery’s meta-fairytale way--- spiriting her away from unwanted suitors at the dance at Chidley Corner’s, rescuing her from Roaring Abel’s drunken debauchery when he sets off with her in their tin lizzie to Port Lawrence to see a film.

Sure, Valancy is alpha when she proposes --- but Barney immediately turns and gains upper alpha hand when he kisses her. That’s right.  Physical initiative is on his end, not hers.  She may have initiated the “let’s be friends for all time and live on your island… and by all time I mean the year I have left to live “ ; but Barney sealed it.

Both Barney and Valancy have alpha moments. Both are strong and willed and wise and winsome and funny and lovely and THAT is why they work: two halves to a whole.  Their passion develops and foremost in words and kinship before in physical consommation…..

When I speak of romance I speak of it as a genre: a genre which calls to mind knights in armour and ladies willing to be rescued. But I also call to mind the connection that most of us want to find in life with a significant other --- If we are what we read, watch, see, listen to--- then we must recognize that we are informed by the stories that shape us.  We become invested in the pairings that most closely match what we would like in our real life. Love triangles work so well because you can Choose Your Own Adventure:  Katniss and Peeta, Katniss and Gale, Bella and Edward (god help you) and match your personal preference to the movie playing in your mind.

If, like me, you want equilibrium of smarts and chats and laughter where you allow that gender roles can be rooted in natural biological make-up; but there is room for personal growth and the colouring of personality and individuality, then you recognize that many guys have the desire to be the alpha : whether the alpha means smashing down things with a hammer or strongly staring resolvedly at a woman they have quietly loved for years. In the same way that females want to be seen as equal; but still get jelly in the knees when thinking that some man would protect, provide…

We don’t have to be one or the other and our romance does not have to define one or the other.  We should look at romance as a reflection of the best parts of human companionship: as a rainbow-flavoured, sunshine-y ideal, as the mecca, the i-ching, the best of ourselves.  Your self can ride a white horse or fall for a guy who has one; or be the guy who waits in the wings while another presses his suit.

It’s not clear cut, it’s not black and white because we are not cookie-cutter humans and we are melded with different shapes, attractions, desires….

Formulaic romance would like us to subscribe to one thing; personal preference re-imagines those scenarios: the best laid example of what we hope our lives to be in a fictional light.

I like strong women. But to win over a strong woman, you have to be a strong man. The best romances for me are ones in which they are equals -- whether that be in kindness (like Amy Dorrit and Arthur Clenam) or cleverness (like Mr. Darcy and Elizabeth, or Mr. Knightley and Emma) or decency (Ron and Hermione).

Frankly, the damsel in distress being stalked by an obsessive, overly protective, patronizing alpha male (Bella and Edward) drives me nuts. I don't have a problem with a guy 'saving' the girl, just with the girl being pathetic. So long as the guy isn't a wuss, I don't care.

For the record, I like Monroe fine. But my favorite is still the Grimm. Or maybe the semi-evil police chief. ;)