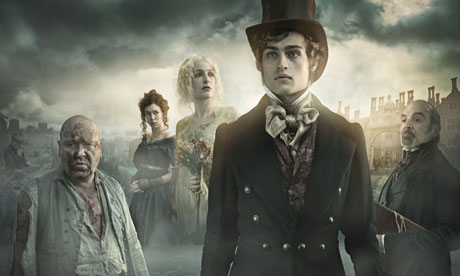 It’s been awhile since Great Adaptations last showed up on le blog.  However, that was because even though I watched the 2011 BBC version at Christmas, I wanted to ensure that all North American friends had the chance to view it on Masterpiece Theatre.  Since my DVD arrived last week, I have spent many an hour carefully perusing it and experiencing each minute detail which has more sternly formulated my opinion that it is the best film adaptation to date. That’s not to say that it isn’t without flaws or that it doesn’t distance itself from the text; but its choices make a lot of sense and it “feels” like Great Expectations: from the murky marshes to the clouded, cloistered cobblestones of Pip’s London, through the satined lace of young women lined like a garland at a party as Pip takes Estella’s ivory hand to the decrepitly ravished wedding feast of the irreplaceable Miss Havisham.

The characterization is deft and taut and each of these well-known personages, who could easily become caricatures so inferenced are they in our cultural psyche, are instead the embodiment of pathos and light, of humour and heartbreak: of proof that, above all, Great Expectations is a narrative borne of extraordinary acts of unwarranted kindness.

It is no surprise that I am completely befuddled and bewildered by the continual influence this particular tale has on me: how it exposes my vulnerability, my strengths, and the darker tenets of human expectation: the trajectory, and further tragedy, begotten of our wanting something more…. But this particular series drew from creaked corner into luminous light the characters I have often felt between the pages of my well-worn novel.  During the Bicentenary Celebrations earlier this year, one statistic ( which I cannot cite, unfortunately) listed both Miss Havisham and Joe Gargery as two of the 10 best-known Dickensian characters.  Great Expectations---whether having been forced on readers in high school---or having been re-visited with stylistic enterprise in the 90s or whether (fortunately) given weight  in two current adaptations ( this miniseries and the upcoming Hollywood) film or even as a funky premise for a South Park episode--- is an inescapable portion of the Western canon.   Perhaps because we can see so much of ourselves in Pip, we can see so much of what we would like to be in the actions of Joe and Herbert and Magwitch, we enjoy the Soap Operatic twists and turns linking Estella, her bat-crazy adoptive mother and the sinister Jaggers and his erstwhile maid Molly---- it’s human relations: sex, power, money, loss of money, disillusionment, odd reconciliation at its best.

As ultimately complex as the tale is and as many characters as it introduces ( some completely left out of this particular imagining: most noticeably Biddy) it is, at its core, a sleek bildungsroman pitting a young and good-hearted orphan against the sudden Cinderella-like fate that follows him to his apprenticeship years as a blacksmith in the Kent Marshes.

This adaptation has received numerous BAFTA nominations for its craft and presentation and it is quite easy to see why:  it is a tangible and delectable world that you can smell and see and touch: it is gritty and horrible, it is crusted with the mould of Satis House and encrypted in the smoke billowing from the forge and as Pip sheds his cocoon to dress in the gentleman’s clothes that propel him out into society with his lovely pal Herbert, we see the finest threads carefully woven to speak their intricate tailorship: a perfect recognition of the period and the Era’s finery. 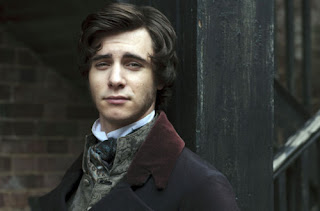 It also includes some of my favourite performances of some of the best-loved Dickensian characters.  For my part, I feel  that this adaptation’s Herbert Pocket, Magwitch, Joe Gargery, Pip and Miss Havisham are the best I have seen.

I encourage you to spend some time in this world. I have revisited it quite a bit.  This past week, I was traveling for work and ended up steeping some tea in my hotel room and catching it again on iTunes:  obsessed? Perhaps a little; but more enamored and bewitched that a dazzling presentation has wrought from my mind’s eye to camera’s lens a kaleidoscopic Victorian world I crave to seep into time and again.
Posted by Rachel at Thursday, April 19, 2012

I'm really glad to find someone else who so enjoyed it -- some do not like it, and I find that a horrific shame. It's wonderful, and my favorite adaptation of the book yet. But then, maybe I am biased, since I think Gillian Anderson is an absolutely terrific Miss Havisham.