TWO! TWO book reviews for the price of one! 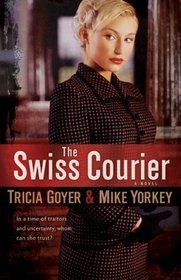 When I received Chasing Mona Lisa from Graf Martin Communications (on behalf of Revell), I was inspired to immediately purchase its predecessor The Swiss Courier by the same authors, Tricia Goyer and Mike Yorkey.

The strongest element of both books is their fast-paced timelines, deft characterization, skill for WWII-era history and aura of suspense and espionage. Indeed, readers of Bodie and Brock Thoene’s The Zion Covenant Series will feel strongly about the depth and competence of the research and fans of Sarah Sundin and the Allie Fortune Series will immediately feel at home with the time period.

In both novels, intrepid Swiss OSS agents Gabi Mueller and Eric Hofstadler race against time from their neutral Switzerland to perform daring operations which could turn the tide of the Allies’ integration in the war.  The Swiss Courier finds Gabi charged with rescuing a German physicist working on the deadly atomic bomb.  Chasing Mona Lisa sees Eric and Gabi attempting to keep Da Vinci’s masterpiece from falling into enemy hands. 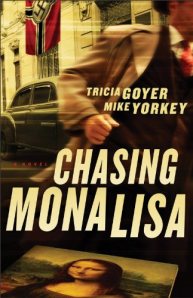 The former begins with the events dramatized in the movie Valkyrie and makes careful note of theologian Dietrich Bonhoeffer and his careful spiritual work to undermine and overthrow Hitler.  In both books, the research is well-plotted out and Yorkey and Goyer’s grasp of the German language and Swiss-German dialect is plausible. I mentioned to a friend how much I appreciated their infusion of German terms and phraseology without immediate translation. It feels like Yorkey and Goyer have eluded the tendency in the Christian market for talking down to the readers: their plots are swift and complicated, there are a myriad of characters to keep pace with in both offerings and there is a saturation of interesting and noteworthy information we are expected to take in stride. While some readers may initially find the twists and skips from one plot setting to another to be convoluted, you soon fall into ease and become accustomed to how fast the pages turn and how you are spirited from one scenario to the next.  While Chasing Mona Lisa did not keep my attention to the same degree as The Swiss Courier, I very much enjoyed meeting Gabi and Eric and look forward to more of their adventures in the future.

I received Chasing Mona Lisa for review from Graf-Martin Communications on behalf of Revell, a division of Baker Publishing. I purchased The Swiss Courier in conjunction

Rachel: what a neat review to read! As co-author of "Chasing Mona Lisa" and "The Swiss Courier" with Tricia Goyer, I'm always fascinated with what readers say. I appreciated what you said about how we try not to "talk down" to the readers . . . we have a saying: Keep the reader smart! For me, the novels are like children: it's hard to say which one you love more. Again, thanks for the careful read and warm review. Mike Yorkey