The movies that most resonate with me are the ones where I leave having felt an experience akin to watching a magnificent piece of theatre or closing the last page of a magnificent book.
Martin Scorsese's Hugo is a wonderment and it will tug at your heartstrings: especially if, like me, you are extremely sensitive to anything relating to imaginative experience and artistic sensibility.

Around four years ago, I was delighted to purchase and leaf through the film's source material: "The Invention of Hugo Cabret" by Brian Selznick and was immediately impressed with its innovative story/picture hybrid, its inclusion of photography and its structure as a love letter to films of old.  The film also marries a passion for literary narrative with a golden nod to the formation of film.   But, on a stronger, deeper and more heart-wringing level, it speaks to the heart of creative beguile.  Not unlike Polanski's The Pianist, it explores the loss and re-discovery of the artist in a world new and unknown.

One of the most potent aspects of this remarkable film lay in its multi-faceted enigma: which winds and turns all of our seemingly disconnected characters like the intertwining togs and mechanisms of the clocks of the Parisienne Train Station: the workings and cogs and sprints and springs which make the pulsating maze of our hero, Hugo Cabret's, world.

Indeed, clocks, time and the passing of hundreds of passengers clacking over the well-trod floor of the Station are a major motif and clever canvas.   Here is where most of the action takes place.  Orphaned since the death of his father: a clockmaker/inventor/ machine enthusiast, Hugo usurps the task of winding and charging the clocks at the crowded train station from the trembling hands of his intoxicated uncle.

Several characters including an uptight security guard, a flower girl, a coffee mistress woo'd by a man disdained by her wiener dog and a surly toy and candy salesman paint the kiosks and act as the stars in Hugo's complicated world.    Yet, the heart of the story lies beyond the adventures of Hugo and his new friend Isabelle: even if the mechanized world of nooks and towers would be more than enough to fulfill the children's imaginative whims.


This film is a love story to cinema, to history, to stories and to the working mind of the artist.   The exposition of a consummate artist starved of the mind he cannot turn off is the main triumph and tragedy of this heart-warming tale. Old books, broad libraries, odd automatons and the preservation of film, not to mention instances invaded by the First World War,add complex layers to a film definitely not made just for the entertainment of children.  I began crying mid-way through when the right book found its purpose and made it to the right owner and my 3D glasses remained fogged for the remainder of the film. 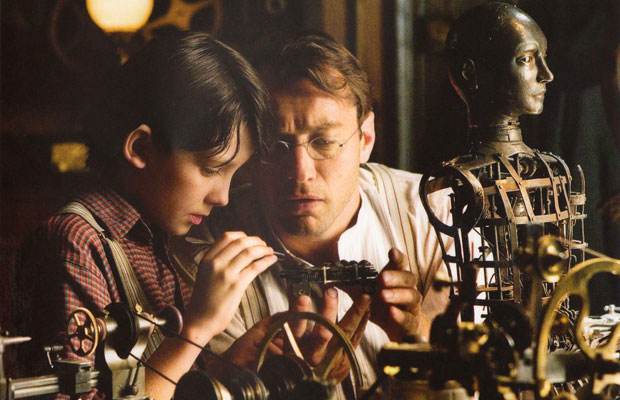 In my opinion, this is the type of magic the Academy should recognize.  It is quite clear that director Scorsese ripped out a piece of his heart and threw it up on the screen for all to see.   To mention the mere craft of this story would take a real film-maker. Thus, I speak to its narrative force, its wildly imaginative imagery and the thematic interposition which will render those who feel the blessed (cursed?) ripples of imagination often ringing through their ears and surging through their veins.

I would encourage you to see this film immediately.  I usually avoid 3D films; but this film is carefully constructed to make the most of dimensional marvel.    Children will learn a lot about the history and incarnation of film while learning new vocabulary (the bookwormish Isabelle is adorably precocious when it comes to throwing around the names Sidney Carton and Jean Valjean. Moreover, words like "panache" and "steadfast" creep into the children's vocabulary).

The relatively unknown film-maker George Melies plays a major part in the film and you will enjoy learning about his contribution to the technical developments of film. He is often credited as one of the first cinemagicians.

Snippets of old film are inserted and I was delighted, as one example, to see a famous train scene featuring a squirming Buster Keaton.  This film will act as a wonderful introduction to the black and white films which so long ago ushered in the magic that children now take for granted each time they see a new 3D film or play a new video game.

Also be sure to check out the novel by Brian Selznick: which marries imagery and narrative to beguile young adult readers.

....just when you think you know what this film is about, it will whirr and whistle and steer you in another steam-powered moment of trickery.   Ben Kingsley, Sacha Baron Cohen, Jude Law, Christopher Lee and Richard Griffiths ( not to mention a beautiful Emily Mortimer) help round out the cast.

This is the best movie I have seen this year.

Paris is not my city (Vienna is, as we all know); but it is painted in glorious light and if you have a hankering for 1930s France you will be in heaven!

For my friends: Jude Law's character and presence made me think of Melrose Plant, Horatio Lyle and Dr. Watson all at once. Not bad.
Posted by Rachel at Tuesday, November 29, 2011

Email ThisBlogThis!Share to TwitterShare to FacebookShare to Pinterest
Labels: film, YA

I really want to watch this movie. I enjoyed the book. It is not playing here yet, though.

Oh well said, my friend! I'm so happy you loved this film too (as I suspected you would!). It is so good, so powerful -- it deserves every accolade it can get as far as I'm concerned. :)