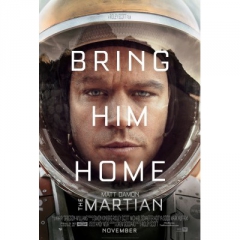 I had the opportunity to attend a screening of the new Ridley Scott film The Martian at TIFF today.

Apparently, they made Roy Thomson Hall 3D compatible especially for this film and I am glad they did! The usual acoustics at the home of the Toronto Symphony Orchestra were, as per usual astounding, and the 3D experience was thrilling.

Based on the bestselling ( and originally self-published ) book by Andy Weir, The Martian tells the story of astronaut Mark Watney who is accidentally left behind on Mars during an emergency evacuation.

Fortunately, he is very, very smart and turns the crew's Hab into a fortress of solitude and survival.


Now, I should begin by saying this is not really my type of film. I am not huge into Science Fiction and Space freaks me out so much I haven't watched Gravity yet. But, this was a light and compelling narrative and Damon's amiable presence and near-daily video log entries are peppered with warmth and humour.

I told my friend as the credits rolled that very few actors could pull this off: make 75% of alone screen time bearable with a genius that never borders on cocky, a staid and salt-of-the-earth manner and a good sense of humour. To add, resourcefulness.

For the first several of Mark's sols ( Mars days) he is alone figuring out how to survive: counting out the rations he has, learning how to cultivate land in an infertile ground so he can grow potatoes and secure food while he waits for the next Mars mission four years ahead.

Fortunately, back at NASA control, life on Mars is detected and some neat science-y stuff allows Mark to touch base with their headquarters.  He literally has the smartest people in the world using their gizmos and gadgets and astro-physics and nerdy aplomb to figure out how to either get supplies to him or re-route the craft, the Hermes, with the crew that unintentionally left him behind, to swoosh past Mars and pick him up and bring him home.

This is a film populated with really likeable people. To add, it is a film that never really relies on the BIG EVERYTHING THAT MUST GO WRONG WILL moments. It chooses its tension wisely and I have to confess to experience some genuine white-knuckle moments.  This is all thanks to Damon's performance, though. He is such a likeable figure you cannot help but wish him home safe and sound.

A unique and ultra-compelling narrative driven by a stellar lead performance (and backed by a soundtrack of disco, of all things), The Martian is a survival film that never borders on existential brooding. Instead, it is full of heart and humour, light and the human will to survive.

I loved this popcorn thriller and think you all will, too! The cinematography is amazing!  And while I thoroughly don't Speak Science, I was pretty impressed at how Mark and his astronaut friends on earth and in space figured out how to launch a one-man-rescue amidst the stars.
Posted by Rachel at Saturday, September 12, 2015

Rachel, I recently read The Martian in preparation for seeing the movie when it releases next month. Though I wasn't a fan of the bad language included, I found the story very entertaining and edge-of-my-seat, but in the subtle ways you mentioned instead of the everything-must-go-completely-wrong-in-huge-ways kind of thing. I'm glad to hear from your review that the movie version should hold up well to my expectations. I'm glad to know that Matt Damon pulls off the alone screen time well with his trademark humor.

Thanks for reviewing this one! I look forward to seeing it even more now that I've heard what you think about it.