Q and A: Natasha Pulley 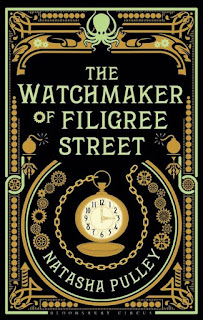 Readers, I cannot tell you how thrilled I was to gulp down The Watchmaker of Filigree Street over the course of Saturday. That's right, I read all day.  This is a keeper book. It is funny and fresh and wonderful. I laughed aloud and often when I wasn't sinking into its gorgeous language.

I was thrilled, too, when Natasha Pulley agreed to do a Q and A here!  Her voice is so special and she is an author that came out of nowhere for me and one that I will follow forever.    I loved her characters immediately!


[[A few snippets of imagery made me trip over how gorgeous they were:

"....the dark corridor to a door the far end under which firelight bled."

"The gold caught the ember-light and shone the colour of a human voice."

"Today the silence had a silver hem."

"...water mumbled in the pipes and there were steps and sudden bright thumps..."

"A prickling terseness started about halfway down his spine as if somebody had rested their fingertips gunshaped between the vertebrae there."


"...still dense over the river where it made skeleton ghosts of ships' masts and trapped the stale smell of the water"

"your science can save a man's life, but imagination makes it worth living."

R: I lost my taste for every other book after reading Watchmaker. Your voice was something I had never encountered before. Do you just sit and write? Or are you a plotter?


I just sit and write. The book didn’t really have a plot at first, but then my editor sort of nudged me and said it might be a good idea if something actually happened.


R:There’s a lot going on in the story---some of it quite dark--- what with nationalism, racism and even terrorism! At times, it seemed to parallel our own world—even though set well over a century ago. How do you think the Victorian age and the “Steampunk” genre best help us confront some of the limitations and darkness of our contemporary time?


Historical fiction is a lot like a telescope. We learn history as a series of facts, unemotionally, and so we tend to think of it in a fairly detached, distant way. Fiction brings everything near again. But if you turn it round the other way and look through it backward, you can make very near things look distant. Very few modern problems are new — they just look new, because they’re closer than we usually see things. Putting them into historical fiction, and making them distant, can sometimes make it clearer what they actually are.


R: My head hurt just thinking of how brilliantly mapped out the entire plot was…not to mention the research from botany to science to watchmaking! The different timelines, the dates, the happenstances, and the events perfectly constructed by Keita Mori. How did you keep track and juggle all of this?


I should probably have kept a big chart, but I’m not that efficient; when I wrote, I tended to have bullet points at the start of new sections to remind me what had to go in and what it had to match up to later, but that’s quite an easy thing to do. A book looks like a linear document when you read it, but writing one, you can skip about from chapter three to chapter twenty without all the intervening stuff to make you forget.


R:I must tell you—I cannot remember highlighting a book so enthusiastically as I did The Watchmaker of Filigree Street. It was at times heartbreaking and tense, yes, but also extremely funny. Do you have a personal favourite moment?


Yes. The moment Thaniel forget the music from the Foreign Office Ball, and the moment Mori forgets how to play it, is probably one of the oldest and most redrafted in the whole thing. I think I spent more time trying to get that right than I did on all the parts set in Japan.


R: absolutely adored the relationships between your characters. Sure, the development of Grace and Matsumoto and Mori and Thaniel could set us in mind of Philip Pullman and Doyle ( as two examples). Yet, they were all so unique and so organic. Were there concrete inspirations for your characters? Or, did they just develop naturally on their own?


Definitely there were concrete foundations for everything, only some of which I can remember. I watched a Japanese sci fi movie called Moon Child (it’s about vampires) in which one of the actors looks very like Mori, so I started blurring the two in my mind after that. I was also reading lots of Sherlock Holmes when I started writing it, and it always struck me as strange that although Watson is yanked always between his wife and Holmes at any given time, nobody ever really seems to get properly upset by any of it. I also read everything by Robin Hobb, who has a marvellous character called the Fool who knows the future. He’s a prophet in a far grander sense than Mori is, and he’s much stranger, but a lot of her stories hinge on how what he can do affects his relationships. That said, concrete foundations only go so far and I think the point at which a story really becomes yours is when you start building your own structure rather than looking at other people’s architecture; after point, the characters did develop by themselves.


R:Another note on character: I loved how there was no distinct line between good and bad and each character had moments where the reader questioned or even misunderstood. Here, I think of Grace. While I found it difficult reading about her reactive response to Mori, I empathized with my belief that she was doing what she thought was right. How did you set to achieve this balance?


Nineteenth century novels are full of total candlewasters who wouldn’t react to a slap in the face; I hate The Portrait of a Lady, because the heroine of it goes back to an awful man at the end for a lifetime of rubbish rather than murder him like you want her to. It’s righteous but annoying. With Grace and Mori, I didn’t want either of them to be a coward, and I didn’t want either of them to be a saint. It felt much more human for them to be afraid of each other and to fight and to come away less than shiny.


R:Finally, what has been your favourite part of your journey to publication thus far?


The book cover, definitely the book cover. I owe the Bloomsbury design team a very big round of drinks.

Natasha Pulley studied English Literature at Oxford University and earned a creative writing MA at the University of East Anglia. Pulley lives near Ely in Cambridgeshire, England. This is her first novel.


Find Natasha Pulley on the web