Bold brilliant and gorgeous, Angela Hunt has long been one of the most talented pens in the industry. With her revitalization of the Esther story she couples her prominent research with her keen understanding of the time’s customs and culture to weave a redefining and definitive fictional account of the Biblical tale. 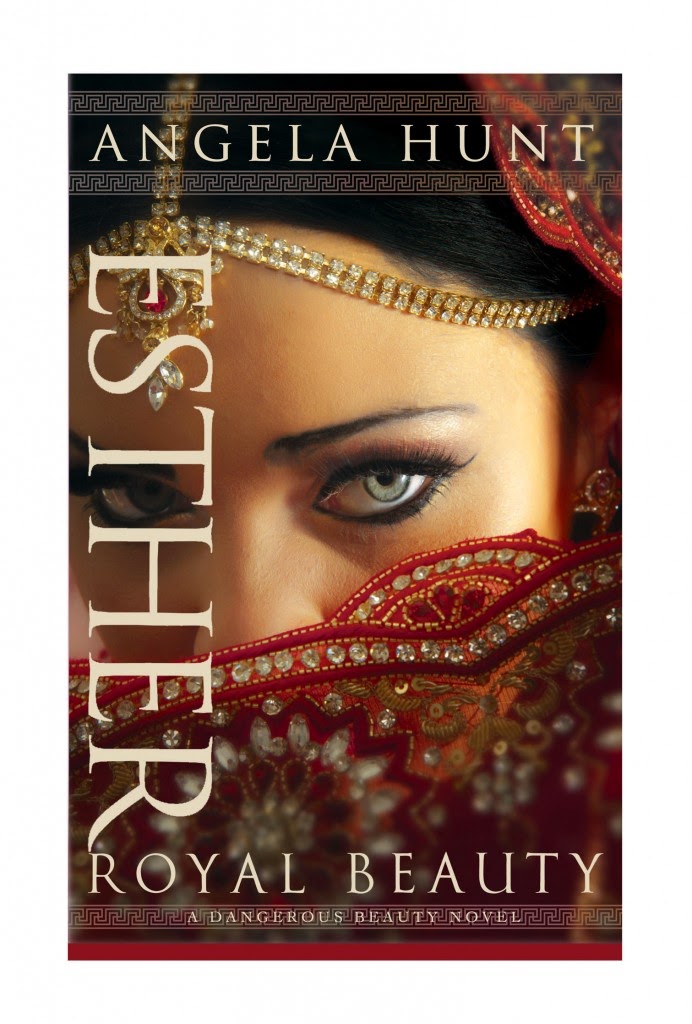 Hunt’s Esther is unlike any you have ever read: edgy, violent, gritty, visceral, lustful and romantic, it is a tale of perverse anxiety and fettered hope. Its characters are as colourful as the kohl-eyed virgins in the King’s harem, while the battlefields are awash with the blood of men fighting for a cause they may not wholly understand.  Xerxes himself is not tamed to fit the ideal romanticism of a sentimental fairytale; rather he is a brutal warrior, insecure and horrible: impaling men and tossing women aside like a half-drunk goblet of wine.

But, the triumph of the novel rests with the two narrators: Esther (Hadassah), she who would be queen and Harbonah, the Eunuch who has the king’s ear.

You will live in Esther’s world as it rounds out in coloured glory. You will taste and smell and feel it. You will be revolted by lavish, wonton parties and chilled by the brutal execution methods. More still, you will be beguiled by a young woman who does not believe in her blossoming beauty as much as she believes in her well-trained mind. Her cousin Mordecai has offered her liberties unknown to women of her age and she is well versed in the scholarship of her people.

Her tale is one of heartbreak and despair, of promise and loneliness and of a woman burdened with the weight of the survival of her people.  You will recognize that Esther didn’t adorn her head with the crown easily and that the choices she made were often ones made on tinterhooks.

Harbonah is one of the most unique and interesting narrators I have ever met and his sad plight is an interesting juxtaposition with his fierce loyalty to the King.  Having been raised alongside Xerxes, he understands the king’s heart in a way few do. His connection with Mordecai and his immediate sense of Esther’s indelible spirit are interesting.
Harbonah  was also of interest to me because his life was so hopeless and yet he was able to appropriate other people’s happiness to make up for the want of his own. Denied his own family, love and children, he was forced to watch all of these natural parts of life take place around him, thus, supplanting his own repressed and vanquished desires on those he cared about.   As the king’s ally, his promotion of the young Esther is one of the most pivotal moments of the tale.

I was pleasantly surprised to see Bethany (which often stays within safe zones) published a book so sensual, so  intellectually visceral and so brilliantly chock full of Biblical verisimilitude.  It is gritty, disturbing, lustful and not without its brand of sexual connotation; but it is realistic.   Hunt’s previous biblical fiction was devoured by me when I was a kid ( JOSEPH!) and it is just wonderful that this, one of the most well-rounded authors alive, has returned to a calling.  You will close the book empowered, hopeful and changed.

“by the time the first citizen of Susa arrived on the inaugural day of the king’s banquet, fresh white cotton curtains canopied the garden”  (consonance)

“the choppy waters outside Salamis churned with bloated bodies, planks, flaccid sails and so many overturned ships that a man could almost travel from ship to shore by stepping on battle debris” (vivid)

“My heart constricted at being called a possession. The children of Israel had been slaves in Egypt and Babylon and Moredcai would not want to know that I had stumbled into slavery, as well. He taught me to be an independent thinker, restraining my thoughts only where the Law of Moses demanded that I rein them in.”

“Before I knew it, my pliant tongue spilled my secrets into the room. Like irretrievable feathers flying from a ripped pillowcase, they fluttered throughout the chamber and made the king smile…when I had hoped to please him in a far different way.”

“I met the king’s ardor with an inquisitive passion of my own.”

I'm intrigued by your review. This is a must read for me now.

Angela is not the only one with a flair for words, Rach! Great review xo xo