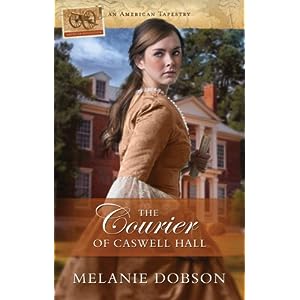 An unlikely spy discovers freedom and love in the midst of the American Revolution.
As the British and Continental armies wage war in 1781, the daughter of a wealthy Virginia plantation owner feels conflict raging in her own heart. Lydia Caswell comes from a family of staunch Loyalists, but she cares only about peace. Her friend Sarah Hammond, however, longs to join the fight. Both women’s families have already been divided by a costly war that sets father against son and neighbor against neighbor; a war that makes it impossible to guess who can be trusted.
One snowy night Lydia discovers a wounded man on the riverbank near Caswell Hall, and her decision to save him will change her life. Nathan introduces her to a secret network of spies, couriers, disguises, and coded messages—a network that may be the Patriots’ only hope for winning the war. When British officers take over Caswell Hall and wreak havoc on neighboring plantations, Lydia will have to choose between loyalty and freedom; between her family’s protection and her own heart’s desires.
As both armies gather near Williamsburg for a pivotal battle, both Lydia and Sarah must decide how high a price they are willing to pay to help the men they love.

One of the reasons I  appreciate the Courier of Caswell Hall is that it delves into a period of history that I still feel is largely untouched in Christian historical romance.  C’mon, you guys, your revolutionary war years are fascinating: the espionage, the loyalists and the new americans, the rife and imminent threat of the French Indian wars still hot on your heels.  I find it really fascinating as a new world tries to emerge and the historical details in Dobson’s book reflect her obvious passion for history, and for this integral part of American history.

I also very much appreciated how independent, intelligent and strong-willed our parallel heroines are.  Romance is, certainly, a part of their lives; but their convictions and moral compasses are the driving forces. Their willingness to obey God beyond human expectation and the rigidity of their circumstance.  When romance is granted them it is again a force for the independent: severing them from the apropos and ordinary.

I must confess that, at the beginning, the switch between Lydia and Sarah’s stories felt a little wobbly and forced to me; but the pairing did eventually find solid grounding.

Lately, I have been trying very hard to focus on what makes opening chapters so readable, memorable and fantastic. Here, we are dropped in the action immediately when Lydia goes for a stroll and finds a stranger. The premonition that this might be the enemy weighs heavily on the reader as she tries to do her Christian duty by nursing him to health while hiding him from her conservative father.  The familial tension, Lydia’s severed family ( the disappearance of her brother) and her political unrest of a world torn asunder are made immediately transparent.

There are edges of mystery on every page. The Courier of Caswell Hall is a bittersweet goodbye to the Summerside Press American Tapestry series. Readers should relish the unique setting, vivid historical canvas, and independent and incorrigible heroines who find love and adventure when the novel spins to a satisfying end.   I loved the battlefield sequences and the patchwork quilt of historical references including General Washington and Lord Cornwallis.  This is an exciting, edifying time period made illustrious when pitted against the beautiful Virginia setting of the novel.

If you’re into solid faith fiction with mistaken identities, the promise of love and tons of adventure, then look no further than here.

visit Melanie Dobson on the web
Posted by Rachel at Monday, September 23, 2013

Used them once before, and they were inexpensive, came early and were true professionals. I now realize I need a regular delivery service, and called them again to ask them for details.