It's been years, YEARS since I saw this film.  Cary Grant, Ingrid Bergman, CLAUDE RAINS (seriously, I would watch Claude Rains in ANYTHING); the second world war spilling over to post-war espionage, Nazis, uranium stored in a well-stocked wine cellar, kisses that go on forever, Ingrid Bergman's gowns, poison, Hitchcockian suspense swelling with camera angles zooming in on important markers of the story's suspense: dwindling bottles of champagne in an icebox, the key to the mystery held in Bergman's hand. 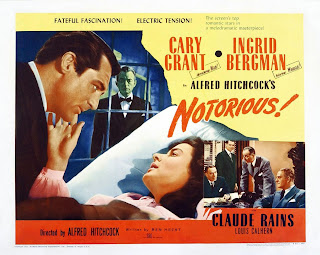 Anyways, there are two people here: Alicia Huberman and Develin.  Alicia's dad was an American traitor and Nazi sympathizer. His age-old connections in Brazil are still recognized and enamoured by Alicia who is lured by Develin into a scheme to help expose traitorous actions abroad.  Patriotism abounds!

Develin and Alicia have a bit of a rocky, erotically-charged relationship; but Develin hides his true feelings and convinces Alicia---notorious party girl, daughter of Nazi sympathizer, renowned notoriously for her partying ways and suspected loose morals, into canoodling with Alex Sebastian: a most-wanted on the American's list of "We Think You Might Still be a Snide Nazi"

Alicia takes it all the way and not only entices and reignites Sebastian's long-time love for her, she decides to marry him when asked, in order to be able to more aptly spy on the goings-on inevitably taking place in his house and the constant entertaining of his numerous Nazi cohorts....

This is a bit of a love story, a bit tragic, a bit wistful and it has, like, the BEST and most tragically sound ending in the history of time.  Yes, there is a twist and yes the villain gets his comeuppance; but you feel like you are punched in the gut. A door slams and you are left with a reckoning feeling that everything is as it should be; but still ----still----- love was involved, was it not?  And you love LOVE ---- passionate, long-burning love; it even makes you slightly forgive villains..... but, nah! it all turns out! 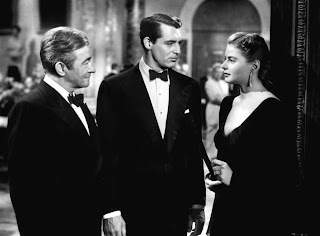 Anyways, I watched a retrospective on the film's long-standing appeal and regard as one of the greatest screenplays of all time and one film historian mentioned that the magic of Hitchcock resounds in those moments where even though you DON'T WANT ANYTHING BAD to happen---because you are invested in the characters and want them to outlive the impending suspense; part of our human nature WANTS something to happen just to see WHAT HAPPENS and how they get out of it....

There is lots of that in this film. Tons! Also, Claude Rains.

I haven't watched this movie in years and years either...I should change that.